Review: One Night of Scandal by Elle Kennedy 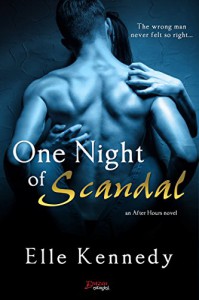 What happens when you take a sinfully sexy ex-MMA fighter and pair him with an off-limits teacher looking for passion? You get One Night of Scandal, a story rife with emotion and eroticism, two things author Elle Kennedy is a master at weaving into her utterly addictive romances.

I’ve probably said it dozens of times, but I want to know where I can sign up to get one of Ms. Kennedy’s heroes. Reed is my latest fictional crush, and for a good reason. The dirty-talking bad boy with a good heart made me melt. Reed knows he screwed up in the past; at one time he was a selfish womanizer. But he’s changed, and his loyalty to his friends and his desire to be seen for the man he has become made me love him. Falling for his best friend’s girlfriend tears him up inside, so he tries to hide his attraction to Darcy. The yearning and the guilt don’t go away even after Darcy and AJ break up, but some things are meant to be. Darcy’s a likeable heroine who, like Skyler (the heroine of the first After Hours story), wants to find passion. She doesn’t expect to find it with her ex’s best friend, a man who previously avoided her like the plague.

When attraction takes hold of Reed and Darcy, One Night of Scandalgets explosively hot. Yet though the story is ferociously sexy (and with Ms. Kennedy as the author there’s no doubt that it definitely is), it’s the emotional component that makes One Night of Scandal stand out in my mind. It isn’t easy for Reed to make Darcy see him as more than a fling. The two of them are clearly perfect for one another – their closest friends can all see it – but Darcy’s not willing to risk her heart on a playboy and Reed has a reputation to overcome. Every doubt, every heartache, is worth it in the end, as Reed and Darcy make a hell of a couple.