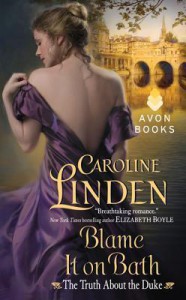 Just before he died, the Duke of Durham revealed to his three sons that he was being blackmailed. Why? Because the duke had married someone before he married his sons’ mother. Normally that wouldn’t be a problem, except for the fact that the duke never bothered to divorce his first wife and he doesn’t know if she was still living when he married his second wife. Now whispers abound that the de Lacey brothers may be illegitimate and they need to discover the truth about their father’s first marriage.

Gerard de Lacey, the youngest brother, is determined to catch the blackmailer and question him. But just before he leaves for Bath, a mysterious woman presents him with an interesting proposition: marriage. Gerard hadn’t planned on entering a marriage with a woman he barely knows, but Katherine Howe is a wealthy widow who needs to get married before her dead husband’s nephew tries to marry her for her fortune. Gerard can’t deny that Katharine’s money is very appealing – after all, he might soon lose his inheritance – but it’s the woman herself who tempts him like nothing and no one else has. Will a hasty marriage of convenience turn into something more than either the bride or groom ever expected?

It was almost impossible for me to put Blame It on Bath down once I started it. Caroline Linden has delivered an engaging, delightful story with two incredibly likeable protagonists that will have you reading Blame It on Bath all through the night. Gerard is caring, considerate, wonderfully sexy. It’s easy to see why Katharine falls hard and fast for him. Katharine, in turn, was the heart of Blame It on Bath for me. She’s had her confidence and personality beaten down all her life and it’s not until she meets Gerard that she starts to let her true self shine through. I loved watching Katharine come into her own over the course of the story. She and Gerard are such a great pair that I’m sure it won’t be long before I re-read their book — seeing them fall in love was that delightful.

Blame It on Bath is the second full length book in Ms. Linden’s The Truth About the Duke series. Ms. Linden provides enough backstory that readers new to the series don’t have to have read One Night in London to follow along. However, I expect that both One Night in London and Blame It on Bath should be read before the final book is released, as the overarching storyline about the duke’s first marriage will be resolved in the next book. I can’t wait to learn the truth about the duke. And speaking of dukes, after reading Blame It on Bath, I’m more excited than ever before to find out what Ms. Linden has in store for the current Duke of Durham, Charles de Lacey. If his book is even half as good as Blame It on Bath is, readers will be in for a treat!
Tweet