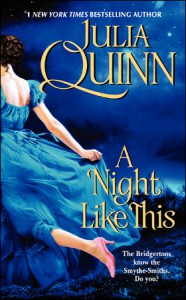 After spending three years abroad due to the repercussions of a youthful mistake, Daniel Smythe-Smith is finally able to return home to England. Having arrived at his home the night of his family’s famous – or is it infamous? – musicale, Daniel decides to watch from the wings…and spies a lady at the piano who is most definitely not one of his cousins. Anne Wynter, governess to three of Daniel’s cousins, has been called in at the last minute to play in the annual musicale. The attraction Daniel feels for her is instantaneous, and Daniel knows he must learn more about the beautiful Anne.

Daniel Smythe-Smith, Earl of Winstead, may not be like the other men Anne has come into contact with, but that doesn’t mean she’s going to risk losing her livelihood for a moment of passion. She’s learned her lesson well, thank you very much. As Anne tries to avoid Daniel, she learns one thing: the Smythe-Smiths are a very persistent lot. How long will Anne be able to hold out against the man she’s slowly falling in love with? She may not get a chance to find out. The ghosts of her past have reemerged, threatening Anne, Daniel, and those they hold dear.

The Smythe-Smiths are back in the enchanting A Night Like This. Julia Quinn’s prose shines in this tale of love, attraction, secrets and, of course, terrible musicales.

Daniel and Anne are two people whose pasts have taken them somewhat off the proverbial path they were born to follow. Though my heart broke for what each has been through, I dare say they are the stronger and wiser for having come out the other end. Both Daniel and Anne are incredibly likeable protagonists and it’s easy to become captivated by A Night Like This for the romance alone. But then, what would a Smythe-Smith novel be without the Smythe-Smith family? The entire extended Smythe-Smith clan delights in A Night Like This, bringing even more humor, vibrancy, and warmth to the novel. I loved watching Daniel and Anne interact with his family almost as much as I adored watching the pair fall for one another.