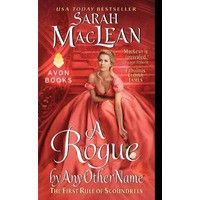 As a young man, Michael, Marquess of Bourne, lost everything in the turn of one card. Ten years later, Bourne is a partner in London’s most infamous, exclusive gaming hell and has more than doubled the money he lost. But all the money and land in the world won’t make up for his past mistake. Only regaining the land that was his inheritance and getting revenge on the man who took it from him will satisfy Bourne. Now Bourne has the opportunity to take what he wants. All he has to do is marry Lady Penelope Marbury.

Penelope was raised to do one thing: marry well. But after surviving the scandal of a broken engagement, Penelope is determined to do more than simply marry the first peer that asks her. She wants adventure, and Michael is the perfect man to give it to her. Their marriage may be for his profit, but Penelope isn’t about to let her new husband keep her from her quest for excitement. And Penelope’s greatest adventure of all just might be capturing the heart of her roguish husband.

Sarah MacLean just gets better and better! A Rogue By Any Other Name captured my interest from the very beginning and didn’t let go.

Penelope, who captured my interest in Ms. MacLean’s last book, Eleven Scandals to Start to Win a Duke’s Heart, starts out A Rogue By Any Other Name almost at her wit’s end. Once she would have been satisfied with simply making a good match, but since her broken engagement eight years ago, Penelope has become determined to find something “more.” Unfortunately, with two younger sisters still unwed, Penelope’s parents aren’t giving her the option of waiting to marry much longer. I could feel Penelope’s frustration and she is such a smart, funny, endearing heroine that I wanted her to find happiness. And as odd a match as a lady like Penelope and a rogue like Michael might appear at the outset, they’re actually perfect for each other. They were best friends in their youth, which helps the pace of A Rogue By Any Other Name, as there is no initial awkwardness. Indeed, Penelope starts coming into her own when she sees Michael for the first time in years and she continues to grow as a character over the course of A Rogue By Any Other Name. Neither Michael nor Penelope are the children they once were, but their familiarity with one another brings an immediate sense of intimacy to their story. Michael, one of four partners in an exclusive gaming hell called The Fallen Angel is very much like a fallen angel himself. He’s shut himself off from the world for the most part and his quest for vengeance is threatening to destroy him from the inside out. Penelope is his salvation in many ways, as she’s the one who makes him want to truly live again. Michael makes many mistakes on the road to finding love, but I adored him and Penelope together so much that I kept cheering for the two of them to find happiness even when their relationship hit its lowest points.

A Rogue By Any Other Name is the first book in the Rules of Scoundrels series and it can be read as a standalone. However, as I mentioned before, Penelope first appeared in Ms. MacLean’s Eleven Scandals to Start to Win a Duke’s Heart. Though none of the characters from that story (aside from Penelope and her family) appear in A Rogue By Any Other Name, fans of Ms. MacLean’s will delight in hearing a brief update on Penelope’s former fiancé, the Duke of Leighton, and Juliana, the woman he scandalized the ton by marrying.