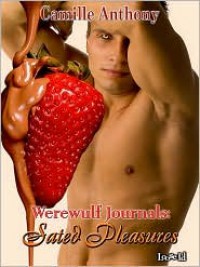 Indigo is a not only second in command to Hunter McCallum and a member of the Non-Human Protectors, she’s a multimorph who is gifted, sometimes cursed, with visions. Indigo, along with her demigod friend Aricles, has been sent to investigate a murder at Sated Pleasures, an unusual weight loss camp owned by Rickard, Prince of Drestovia. But even her visions can’t fully prepare Indigo for the devastating impact Rickard will have on her senses. As mutual attraction begins to lead to love, danger threatens the lovers. A killer, desperate to evade capture, lies in wait. The clock is ticking. Will Indigo or Rickard be the next victim of the crazed murderer?

After finishing Camille Anthony’s last Werewulf Journals book, Hungry Pleasures, I was on the edge of my seat waiting to read Sated Pleasures. Happily, this story is even more engaging than the last. Indigo and Rickard are interesting characters and I was fascinated to learn about them. Though desire for one another hits them instantly the moment they meet, I was curious how Ms. Anthony would address this, given Rickard’s love for his best friend, Pavel. She did so marvelously, making me truly feel Rickard’s love for Indigo while never diminishing what he and Pavel are and had once been to one another. I finished Sated Pleasures confident in Indigo and Rickard’s growing relationship and incredibly eager to see them find happiness together.

The secondary characters (if they can be called that) in Sated Pleasures are no less interesting than Indigo and Rickard. To my delight, the story brings closure to two romances from the previous book. Unfortunately, it also made me insanely curious to learn more about the utterly delicious Aricles and I find somewhat impatiently waiting, hoping Ms. Anthony writes a story for him.