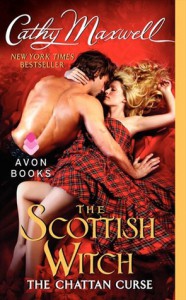 In the seventeenth century, Charles Chattan broke the heart of Rose of the Macnachtan, who then committed suicide. Her mother, a powerful witch, cursed not only Charles, but his entire line. When a Chattan male falls in love, he will die. The curse has proved true for centuries, and by 1814, Neal, Harry, and Margaret Chattan are the last of Charles’s line. Neal, Earl of Lyon, has already fallen in love and he’s growing weaker by the day. It’s up to his brother, Harry, to find a way to break the curse before it’s too late. Harry is desperate to save his brother and his search brings him to Scotland…and Portia Maclean.

Portia Maclean doesn’t believe in magic, but when she hears a rich Englishman is searching for a witch, she masquerades as one to save her family from ruin. Only Colonel Harry Chattan isn’t the arrogant, deluded Englishman she expects to find. Soon, Portia is drawn into Harry’s quest…and into his arms. But will their closeness help bring about an end to the curse? Or will it cost Harry his life?

Curses, witches, and a love destined to be all blend together in The Scottish Witch. Harry is a man who has battled personal demons and come out the victor. He’ll need his strength, for in The Scottish Witch he’s racing against time to break a powerful curse. I loved the first half of The Scottish Witch, for author Cathy Maxwell gave a great sense of urgency to Harry’s search. The energy of the story is reduced in the second half as the romance becomes the central part of the story. It isn’t that I didn’t like Portia; I adored her. She’s smart, resourceful, and protective of a family who doesn’t appreciate her as they should. I wanted her to find happiness with Harry. But the love story felt a bit disjointed. I felt like I was being told the relationship developed rather than seeing it, which made the second half of The Scottish Witch slightly less entertaining than the first half of the book.

The Scottish Witch is the second book in the Chattan Curse series. It can be read as a standalone, but I would recommend reading the series in order, starting with Lyon’s Bride, because of the overarching storyline. Ms. Maxwell has an interesting and problematic premise with The Chattan Curse series. I admit, the tension in both Lyon’s Bride (Neal’s book) and The Scottish Witch is high since you don’t know how the heroes will live. However, the storyline which makes the series unique also makes the romance a bit bittersweet since the heroes are dying and you don’t really get a sense of “happily ever after.” I hope when the curse is broken in the final book that readers will get a better sense of the future of the Chattan family as a whole.

Overall I enjoyed The Scottish Witch. Harry and Portia are likeable characters and Ms. Maxwell has me invested in the overall series plot. I’m looking forward to seeing how Margaret will break the curse in The Devil’s Heart.
Tweet