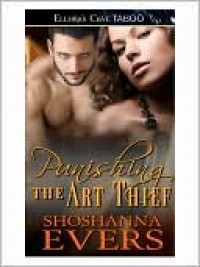 My review is cross-posted from Joyfully Reviewed: http://www.joyfullyreviewed.com/new-reviews/punishing-the-art-thief-by-shoshanna-evers

Art History professor Melissa Dwyer is an old hand at crashing parties where new art will be unveiled. But her luck at never getting caught runs out when she crosses path with security guard James Tannen, who took one of her classes a few years before. James lets her crash the party, but when Melissa spots a priceless – stolen – Rembrandt and decides to make off with it, James loses his job.