Honey Trap (Going Down Under) 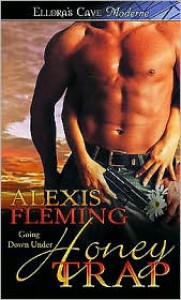 My review is cross-posted from Joyfully Reviewed: http://www.joyfullyreviewed.com/reviews/Feb10/honeytrap.af.html

Australian scientist Kyla Harris’s project to invent a new tactical weapon has gone terribly wrong. Rather than creating a cologne that can disguise a person’s scent, she’s got a potent aphrodisiac on her hands. Things only get weirder when the CIA gets involved, bringing with it the sinfully handsome American agent Logan Matthews. Logan’s duty is to act as Kyla’s bodyguard and protect her from whoever is trying to steal the formula. But Logan wants to do more to her body than guard it. Kyla is completely on board with getting in touch with her inner vixen, and Logan Matthews, until she finds herself falling for the sexy agent. Is Logan’s desire for her the real deal? Or is he just reacting to the aphrodisiac she creates?

The action moves fast and hard and the hero and heroine even harder in the sexy Honey Trap. Kyla and Logan are both intelligent, likeable characters, each slightly out of their depth (Kyla with the power of the aphrodisiac, Logan getting situated in Australia). While I’ll leave it to readers to discover if it’s the aphrodisiac or just plain ol’ lust at work, the desire between Kyla and Logan flares instantaneously and only burns brighter as the story goes on. Alexis Fleming has created two good-natured protagonists and puts them in an entertaining, albeit somewhat unusual situation, and then turns up the fun to create a thoroughly enjoyable tale.
Tweet