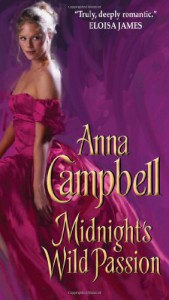 Revenge is a dish best served cold, and no one knows that better than Nicholas Challoner, Marquess of Ranelaw. He's waited years to pay back Godfrey Demarest for ruining his sister and now he finally has the opportunity. Demarest's daughter is out for her first season and Nicholas intends to seduce and ruin the girl. There's just one hitch in Nicholas's plan that he never saw coming: the girl's companion, Miss Antonia Smith.

Antonia is no stranger to ruination. A mistake in her youth led her father to disown her and now she must disguise her identity to move about in society. She’s determined to protect her charge from Ranelaw's scheme, but she never expects that she herself would fall for the handsome rake – not after what happened to her before. Yet something about the marquess draws Antonia to him, making her yearn for wicked nights filled with passion.

Both Nicholas and Antonia find their attraction to one another impossible to resist. But can Nicholas give up his quest for vengeance? And will Antonia forgive him if she learns his true intentions? Anything's possible when love is on the line.

Readers beware: do not start reading Midnight's Wild Passion late at night. You'll stay up, as I did, telling yourself you'll only read one more chapter before putting it down for the night. Next thing you know, you've finished this marvelous book and discover that it's nearly dawn. And, as you feel yourself dragging through the next day, running on little to no sleep, you'll say it was worth it. Because an evening spent with Antonia and Nicholas definitely is. Anna Campbell is a master at drawing a reader in from the very first page and keeping them captivated the whole book through.

There's nothing not to love about Midnight's Wild Passion. Antonia is a brave woman who has made mistakes in the past and doesn't shy away from handling the consequences. She's not perfect and she's realistic enough to regret the fact that youthful passion altered the course of her life dramatically. This balanced well with her beauty, intelligence, and wit. Antonia was both an incredible character and relatable heroine at the same time. Nicholas, though handsome as sin, isn't perfect by any stretch of the imagination. He's willing to ruin the life of one girl to pay back the seduction and abandonment of another. In any other author's hands, Nicholas might be a villain for much of the story. Yet Ms. Campbell has the most incredible way of making anti-heroes compelling, sensual heroes. Antonia was the perfect foil for him and together they were a dynamic pairing. I smiled at their banter, was avidly turning the pages to watch their romance progress, rooted for them to overcome the obstacles both of their own and others' making, and was dazzled by how Midnight's Wild Passion ended.