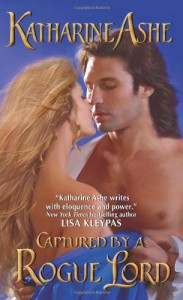 Serena Carlyle knows that the life most aristocratic daughters expect to have will never be for her. At twenty-five, Serena is firmly on the shelf and her goal for this particular season is to ensure that her stepsister, Charity, isn't pushed into an unhappy engagement by her mother. Though, to be honest, the Earl of Savage – the man Charity's mother wants her to marry – could be the perfect bridegroom for Charity, if he gave up his rakish ways. The earl is not only their neighbor, he's handsome, young, wealthy, and Serena would love nothing more than to have his aid in stopping the smugglers that are veritably crawling the coast by their homes. However, Serena's first encounter with her potential brother-in-law is anything but ordinary. A kiss in a darkened room makes Serena yearn for things she knows she cannot have…and starts her fascination with the tempting Alexander Savage. Soon Serena finds herself falling for a man whose secrets are the stuff of legend. For Alex isn't merely an earl, but the infamous pirate Redstone.

Get ready for a spectacularly sensual adventure in Captured by a Rogue Lord. Katharine Ashe starts off with a bang in this exciting romance, with sparks flying between Serena and Alex. I was hooked immediately by this pair and could feel the grin spreading across my face as Serena and Alex started their obstacle-filled road to happily ever after. The two of them are bright, compelling protagonists and Ms. Ashe brought them to life in such a way that I wish they were real, if for no other reason than they'd be people I would want to know.