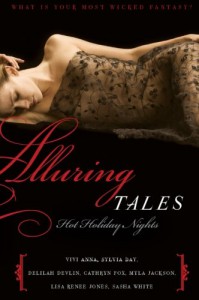 My review is posted on Joyfully Reviewed: http://www.joyfullyreviewed.com/reviews/May09/alluringtaleshotholidaynights.ANTHO.html

“Peaches and Cream” by Cathryn Fox

The premise of “Peaches and Cream” is a delightful one. A sassy heroine gets to act out her deepest fantasies with a gorgeous hero and, for part of the tale, his best friend. Yet while the plot sounds fun, I never really got into the story itself. Cathryn Fox piles one erotic encounter after another, which would be fine if I had any emotional connection with the either Jack or Jennifer, which I didn’t. While the sex scenes were hot, the way in which they were presented seemed to me a bit awkward at times. In particular, the ménage scene seemed a bit forced, as if it were included for the sake of having a ménage scene. The story indicated there was a romantic connection between Jennifer and Jack, but it strained credulity that I was supposed to believe the two had such a connection purely because Ms. Fox told me so; in other words, I didn’t feel it. I have read another of Ms. Fox’s stories before and enjoyed it, but “Peaches and Cream” was just not for me.

Trouble has come back into town in the form of Harmony Wilkins. She’s had a crush on Sheriff Dalton McDonough since they were in high school and she’s returned home, determined to get her man. Even if she has to risk arrest to do it.

There’s something fun about a heroine brazen enough to strip down and skinny-dip in strangers pools in order to catch her dream man’s attention. “Indecent Exposure” has the potential to be a sexy, fun story. Dalton is the archetypal alpha male who will take charge of his hellion heroine when needed. Harmony starts out as entertaining, but her boldness quickly becomes trying. I felt that I should like Harmony, since she’s the heroine of the story, but she seemed to lack depth. Though it fizzled out, “Indecent Exposure” definitely appeals to the sense of “what if” when thinking about that elusive high school crush so many of us had.

When her brother’s sexy best friend moves back into town, Laura Cameron decides it’s time to make her move. For years sexual tension has built between her and Blake Alexander, but fear of her brother’s reaction has kept Laura and Blake apart. But now Matt has roped Blake into participating in a charity bachelor auction – a masked charity auction – and Laura’s not letting a good opportunity pass her by.

“Forbidden Fruit” sizzles with the hero and heroine’s previously unrequited passion finally being fulfilled. Lisa Renee Jones definitely turned up the heat between the very likeable Blake and Laura. The only problem I had with the story is that it seemed to heavily rely on the protagonists’ fear of Matt’s reaction to their relationship. Given Matt’s character, this fear seemed unfounded and therefore it came across as an obvious plot point. Yet, all in all I enjoyed “Forbidden Fruit.” The characters were endearing, the sex hot, and Ms. Jones’s writing style fluid, making for a satisfying read.

Angie Jordan can’t believe what she’s just done. She and Daniel Adams have been tasked with creating an ad to bring up their advertising agency’s sales during Christmas. Taking a risk, A.J. comes up with an ad on her own featuring an alluring woman in a sexy, traffic-stopping red dress. When Daniel, the man A.J.’s secretly in love with, sees the giant ad, he’s struck by the gorgeous “Billboard Babe.” To A.J., Daniel’s reaction to the model is the sign she needs to seduce the man of her dreams. Because “Billboard Babe” is her.

Myla Jackson heats up the workplace with this sensual, charming story. A.J. is an endearing heroine who is easy to identify with. She and all those around her have gotten so used to her job and work attire that the woman she is beneath has gotten buried beneath the plain suits and pinned back hair. A.J. isn’t magically changed by her “Billboard Babe” persona; it just gives her the confidence she needs to take what she wants. And what she wants is Daniel.

What I love about Daniel is that he isn’t just attracted to the “Babe” side of A.J. Though she doesn’t know it, Daniel had been fantasizing about A.J. long before she donned the slinky red dress. It made the connection between them feel more powerful, the love story more believable in that the ad just gave the pair the extra push they needed.

“Billboard Babe” is an utterly delightful story. It’s both sexy and sweet and has two incredibly likeable protagonists whom I couldn’t help but adore.


“Wish upon a Star” by Sasha White

“Wish upon a Star” combines D/s eroticism with a touch of science fiction for a story that should work. Yet, though all the elements are present and I enjoyed Sasha White’s writing style, “Wish upon a Star” never truly captured my attention. Sarah certainly had potential, but when paired with the fairly one-dimensional Nealon, the spark I hoped to see in her never surfaced. I liked that Nealon appreciated Sarah’s strength, but I never truly felt their connection as I should have.

Once, warlock Max Westin had been charged by the Council to collar or kill Victoria St. John, a feline Familiar who had gone feral after the death of Darius, her warlock. Now, Max and Victoria have angered the Council by choosing their love for one another over the Council’s dictates. Their bond is as strong as ever, Max and Victoria are determined to take down the Triumvirate, those that killed Darius, and the Council is refusing to help. But when facing an enemy that draws its power from the Source of All Evil, will one warlock and his Familiar be able to survive?

Max and Victoria’s story began in “A Familiar Kind of Magic” in the first Alluring Tales anthology. Though I haven’t read the first story, Ms. Day provided enough information that I was able to follow along with ease. What drew me to “That Old Black Magic” is that I could not only feel the bond between the lovers, but as the story went on I could see their love for one another deepening. I was completely engaged in the tale because I felt connected to the characters, wanted to make sure they’d survive the seemingly impossible odds stacked against them. The trials and pain, both past and present, that Max and Victoria endure and overcome make “That Old Black Magic” both heartbreaking and heartwarming. Enchanting!

It’s been two years since Sangria Silver and Vance Verona were able to escape from First Lady Maxine Madison. But the lovers’ luck has just run out – Maxine’s man has found them. They escaped Maxine’s clutches once. Will Sangria and Vance be able to do it again?

“Silver Waters” is a continuation of the story “Quick Silver” from the first Alluring Tales anthology. Though I was able to follow along with the tale, by not having read the first story I feel I missed the emotional component, which would make me connect with the characters. Sangria and Vance had the potential to be interesting, but fell short of that mark. Perhaps the story would have benefited from a longer format so the characters, villain and hero alike, would feel more three-dimensional. While “Silver Waters” did not appeal to me, fans of “Quick Silver” should enjoy it.