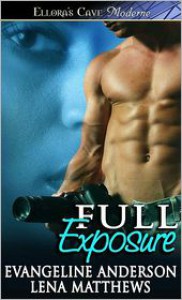 Caution: Turn off the heat before reading because Full Exposure is scorching! Lena Matthews and Evangeline Anderson have delivered a well-crafted tale that is like foreplay gone on overdrive in the best possible sense.

I adored Full Exposure. It’s provocative, engaging, and was pure pleasure to read. This was the first book I’ve read by either Ms. Anderson or Ms. Matthews, and I look forward to reading more by each of these talented authors.
Tweet