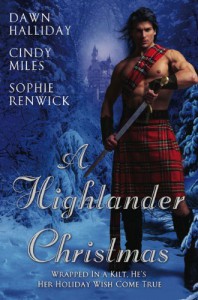 “Winter Heat” by Dawn Halliday
Maggie MacDonald’s mother always told her that her clan brooch would lead a MacDonald woman to her soul mate. Maggie doesn’t believe the legend, but she does find the brooch helpful in her last-ditch attempt to flee a brutish suitor. Her escape sends Maggie into a blizzard…and then into the arms of warrior Logan Douglas. Attraction flares, but in order for their holiday romance to last, Logan must find a way to free Maggie of the villain who wishes to possess her.

The protagonists in this enjoyable story by Dawn Halliday could melt snow with the kind of heat they generate. “Winter Heat” is a sexy story about finding love where you least expect it. Both Maggie and Logan are likeable characters, each with strengths and weaknesses that complement one another. The villain is suitably despicable, making the reader cheer all the more for Maggie and Logan. This is the first story I’ve ever read by Ms. Halliday and I look forward to reading more of her work.


“Yuletide Enchantment” by Sophie Renwick
All her life, Isobel MacDonald has felt a connection to the white hart in the woods. She doesn’t put much stock in the ancient tales of Annwyn or the Sidhe said to inhabit the woods, but Isobel can’t put her finger on why she is repeatedly drawn to the forest. At least not until she loses her clan pin. It’s then that she meets Daegan, the Sidhe prince, and also the white hart Isobel has seen since she was a child. But love between a Sidhe and a mortal is forbidden, so when Daegan and Isobel fall for one another, what are they to do?

Something sensual lurks in the woods in the magic-filled “Yuletide Enchantment.” Sophie Renwick creates two likeable protagonists and sets the stage for some interesting scenes as Isobel and Daegan fall in love. However, I was left with many questions at the end of the story which kept me from liking “Yuletide Enchantment” as much as I wanted to. However, I am excited to read Ms. Renwick’s book for Daegan’s nephew Bran.


“A Christmas Spirit” by Cindy Miles
Paige MacDonald doesn’t know what possessed her to book a self-driving tour of the North West Highlands in December. When her car breaks down in the middle of a snowstorm, Paige takes refuge at the Gorloch B&B, a castle inhabited by the most unusual of Highlanders.

Gabriel Munro can’t believe the innkeepers left him alone for the holidays. He was sure the weather would keep visitors away, but he can’t very well turn out a woman in the middle of a blizzard. Especially not a woman as tempting as Paige. But what will Paige say when she learns that the man she is trapped in the castle with is a ghost?

Spirits have never been so sexy as in this enchanting story by Cindy Miles. “A Christmas Spirit” is my favorite story in this anthology; it’s both charming and unique. I liked Paige immensely. She’s intelligent, hardworking, and not used to a man practically falling all over himself for her. As for Gabriel, he’s a Highland ghost worth sighing over (and I admit I did).

“A Christmas Spirit” is the first story I’ve read by Ms. Miles, but it won’t be the last. Characters from Ms. Miles’s Highland Knight appear in this tale and I liked them so much I want to go back and their story.

A Highlander Christmas features stories that span over nearly three hundred years. The only connection between each tale is the heroines’ pin. I enjoyed the concept and the progression through time and each story featured its protagonists overcoming seemingly impossible odds to be together. A Highlander Christmas was a satisfying anthology, perfect for curling up with on a cold winter’s night.
Tweet