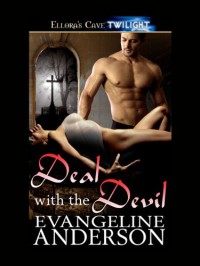 Luz Velez is a were that has never been able to shift. Because of a traumatic event in her childhood, Luz suffers from serious panic attacks that hold her back in every aspect of her life. Then Luz meets Jude Jacobson, the vampire that even other vampires fear. Though weres and vampires are supposed to be enemies, Jude offers her a deal she can’t resist: a blood exchange that will feed him and give her the ability to control her anxiety. Luz knows there has to be more to the arrangement than she’s aware, but desperation makes her take the deal with the sexy, green-eyed devil. But her new sense of control brings an evil from Luz’s past back to haunt her, and it’ll take Jude’s help – and his love – to keep both of them alive.

Deal with the Devil is one of the most intriguing paranormals I’ve read this year! Evangeline Anderson blends together sensuality, danger, pain, and healing in such a way that readers are sure to be entranced with Deal with the Devil from beginning to end. Luz is a heroine that has been horribly hurt in ways that will twist your gut. Though I won’t spoil the details, I will say that I commend Ms. Anderson on her careful handling of Luz’s ordeals and I hold a lot of respect for how Luz and Jude faced her past. As for Jude…I could have used a fan when reading about him. This drop-dead gorgeous vampire has secrets of his own which will keep readers on the edge of their seat, but what really captivated me about him was his innate kindness. There’s no doubt about it – Jude is ruthless when he needs to be, but there is such tenderness in him that he captured my heart instantly. Watching he and Luz fall in love was a great pleasure and I cannot help but sigh when I think back on them as a couple. Twists and turns, peril and pleasure ramp up the action in Deal with the Devil and I couldn’t have been a more satisfied reader. I loved Deal with the Devil and for that reason I Joyfully Recommend it!
Tweet