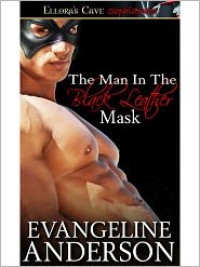 
Jacqueline is a beautiful, high-powered attorney who has everything she could want in life, except for love and the fulfillment of her deepest desire. The successful lawyer may rule the courtroom, but she fantasizes about being roughly dominated in the bedroom. Jacqueline has long since put her fantasy away, believing no man could ever fulfill it for her. That is, until a wicked Halloween night with the young attorney she’s mentoring leads her to voice her desires. What Jacqueline doesn’t expect is that the attorney in question, Ryan, wants nothing more than to give Jacqueline exactly what she wants. Yet, soon after Jacqueline and Ryan embark on their erotic adventure, both find it hard to keep pretending at the office that there is nothing between them. Ryan wants a real relationship, but Jacqueline believes they are too different from one another to have something permanent. Will Ryan be able to convince Jacqueline he’s perfect for her as himself, rather than just as the man in the black leather mask?

It’s an undeniable fact that Evangeline Anderson knows how to make you sweat. With The Man in the Black Leather Mask, Ms. Anderson has once again cranked up the heat to scorching and I couldn’t be happier. But while The Man in the Black Leather Mask is erotic to the extreme, make no mistake that it’s all about sex; the driving forces of the story are Jacqueline and Ryan and the growth of their feelings for one another. Jacqueline is a woman who’s been burned by love in a number of ways. It’s hard for her to trust a man with her heart and it’s even harder when the man she finds herself falling for is a gorgeous hunk ten years younger than she. While her uncertainty is understandable, I looked forward to Ryan making her see that he is perfect for her, just as he is. And how could you not love Ryan? He’s the kind of man who goes all-out for the woman he loves, carrying out her fantasy and proving that his feelings for her are the real thing. They were a wonderful couple, both in bed and in the office and I loved reading every bit of their developing relationship. Fast-paced and more than a bit naughty, The Man in the Black Leather Mask is wickedly good fun.
Tweet