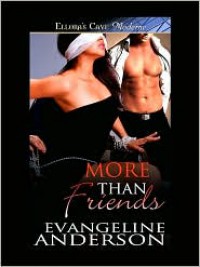 Zach has been in love with his best friend Emily since high school. Unfortunately, Emily never sees him in a romantic light. But when Emily’s bizarre employer lands Emily in hot water – namely front and center on the auction block being sold as a sex slave for a charity event – Zach doesn’t hesitate to ride to the rescue. Yet, if Zach and Emily want to make it out of the auction in one piece, they’re going to have to put on a show that can ruin their friendship…or give Zach the chance to make Emily see him as more than just her best friend.

Evangeline Anderson takes the classic idea of friends becoming lovers and gives it an erotic twist in More Than Friends. Both Emily and Zach are intelligent, genuinely likeable people, so it was easy for me to become invested in their romance. Unfortunately, More Than Friends fell short for me in the execution. The auction came across as too over-the-top to be believable and the sex scene that followed was distractingly stilted. I felt bad for Zach and Emily, and while I’m no stranger to dubious consent scenes in Ms. Anderson’s books, she usually handles such scenarios better. Zach and Emily seemed to have such great chemistry that I was disappointed the potential they had as a couple was never capitalized on. Still, I wouldn’t say More Than Friends is a bad book. True, it’s not my favorite of Ms. Anderson’s and I had expected the plot to be handled a bit better. Yet, all in all, More Than Friends is an enjoyable story, mostly due to the likeability of its protagonists.
Tweet