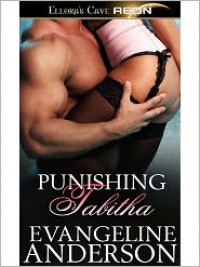 Things have been going wrong for Sergeant Tabitha Bryce ever since she joined the crew of Pride of Justice. But things really hit rock bottom when, in an attempt to prove herself to her commanding officer, Captain Keer, Tabitha tries to pull off a one-person sting operation and bring down a notorious slave trader. Much to her horror, Tabitha not only finds herself captured and on the auction block, but her most intimate areas have been bound by a thin, silvery cord. A cord which puts her in sexual torment and that won’t come off without some very special, very personal attention from her new master. And when Keer rescues Tabitha at the auction by purchasing her, both discover that life aboard the Pride of Justice is about to get a whole lot hotter.

Evangeline Anderson can raise the temperature of a room in a heartbeat, and nothing showcases that better than Punishing Tabitha. It’s a divinely sensual story with a lot of heart, and immediately upon finishing the book I wanted to read it again.

Tabitha has lots of spark. She acts rashly, much to her detriment, but it’s easy to sympathize with her need to prove herself. Keer is a hero worth sighing over. His outward calm is belied by his inner passions and I loved watching him struggle to present a professional demeanor towards Tabitha when inside he was falling in love with her. Miscommunication and incorrect assumptions are the biggest obstacles Tabitha and Keer have to overcome in their relationship, and I couldn’t put Punishing Tabitha down because I so wanted them to see them find happiness with one another.