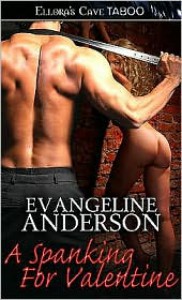 There are two things Valentine Nichols wants most in the world: for Shane Daniels to truly see her and to find someone who’s willing to take her education in the world of D/s to the next level. Though she’s been in love with Shane for years, he’s her brother’s best friend and Valentine’s self-appointed protector, so the first is out. Valentine’s search for latter, however, takes her to a local BDSM club where she discovers the last thing she ever thought she’d find: Shane wielding a whip. Armed with the knowledge that Shane is a Dom, Valentine hatches a very wicked plan. She’ll get Shane to notice her by asking for lessons in submission.

Shane can’t believe what Valentine has asked of him. There’s no way he can get sexually involved with his best friend’s little sister…even if she has grown into the woman he desires above all others. But Shane doesn’t want Valentine to look for others to teach her about submission, either. So he strikes a bargain with her. He’ll teach her about D/s, but there won’t be any sex. Valentine agrees, but something tells Shane she won’t be sticking to their deal.

Lessons in submission quickly escalate to a battle of wills. Who will win? And will the cost of victory be losing the one they care about the most? Or will the prize be a love that could last a lifetime?

A Spanking for Valentine is sugar and spice and everything…naughty. I have a new favorite book of Evangeline Anderson’s and trust me when I say A Spanking for Valentine has a lot of competition. What sends this book over the top for me is the mix of tender and tart. There’s something incredibly sweet about both Valentine and Shane. Their love for one another comes right off the page from the start, even if Shane doesn’t recognize the depth of his feelings for her at first. Ms. Anderson definitely hit my “dreamy sigh” button more than a few times in A Spanking for Valentine, even at moments I wouldn’t have expected it.