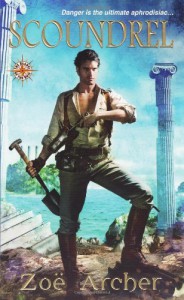 The world is filled with magic, and, as one might expect, the world is also filled with people who would use that magic to fulfill their own selfish desires. That’s where the Blades of the Rose come in. The Blades are a group of men and women sworn to protect objects of magical power and return them to the countries and people they belong to.

London Harcourt knows nothing of the Blades. She also doesn’t know she’s the daughter of a powerful member of the Heirs of Albion, a British cult bent on subjugating the world’s magic for England’s – and their own – benefit. A brilliant linguist, London often has to hide her intellectual pursuits, considering her father’s view that women are supposed to be pretty, weak creatures and nothing more. But when her father says he needs her skills as a linguist, London jumps at the chance to travel to Greece.

Bennett Day is a scoundrel, a ladies’ man, and a talented cryptologist for the Blades. He knows that the Heirs are after the legendary Greek Fire, and he’ll do anything to stop them from possessing it. He just never expects the sexist Heirs to bring a woman on their mission. Nor does he count on the fact that the lady in question will capture his interest in a way no woman ever has. Unfortunately, London is the daughter of his enemy and she’s also one of the very, very few people in the world who can speak a dialect of ancient Greek that’s needed to solve ancient riddles and locate Greek Fire. Can the Blades’ legendary Casanova convince the daughter of an Heir to work with him? In an ordinary situation, Bennett would have no doubts. Yet, London is anything but ordinary…

Zoë Archer continues her incredibly unique Blades of the Rose series with Scoundrel. There’s so much thought, detail, imagination, and knowledge of the nineteenth century world in Scoundrel that it’s a veritable feast for the mind. I loved the complexities of the mysteries London, Bennett, and their allies had to solve.

Bennett and London themselves are sure to charm any reader. Bennett is a rogue through and through, but he’s far from heartless. In fact, he gives his heart to just about every woman he meets. What makes Bennett unusual for a rake is that his concept of love is no less valid for his spreading it than London’s idea of love which is the more conventional heart belonging to only one person. Still, I adored watching Bennett discover that his love for London is something out of the ordinary. As for London, she is a woman of extraordinary intellect and bravery that, while common for Blades of any gender, is unusual for a gently-bred Victorian lady. The two of them together fit like lock and key and it wasn’t difficult to become invested in their romance. And speaking of romance, there is a secondary love story in Scoundrel that I won’t spoil other than to say it captured my attention from the start and I was equally, if not more interested, in it than I was in London and Bennett’s romance.

The action of Scoundrel keeps the story moving at a quick clip. Ms. Archer also brings the Greek isles to life in much the same way as she did Outer Mongolia in the first Blades of the Rose book, Warrior. Aside from the fight against the Heirs that spans the series, there isn’t any overlap between Warrior and Scoundrel. A reader who has not yet read Warrior could pick up Scoundrel and follow along without any problems (though I still recommend reading Warrior for no other reason than its sheer entertainment value). Overall, I continue to enjoy the complex, engaging world of the Blades of the Rose. Ms. Archer is an incredible writer and storyteller and I can’t wait to read the next Blades of the Rose book, Rebel.
Tweet