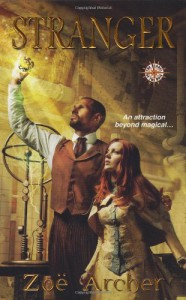 My review is posted on Joyfully Reviewed: http://www.joyfullyreviewed.com/new-reviews/stranger-by-zoe-archer

Reporter Gemma Murphy is often considered an anomaly: she’s a woman who wants to write about more than traditional “female” topics. Gemma has to work twice as hard as a man to get a good story, so she never lets the prospect of one pass her by. So when she’s on the edges of the Canadian wilderness and overhears an elegant Brit talking about magic, saving the world, and danger, how can she pass the story up? But the Brit and his companions are no fools and Gemma’s soon caught spying on them. But discovery is only the beginning of her adventure, for the man she’s spying on is no other than Catullus Graves.

Catullus Graves knows what it’s like to be considered strange. His ancestors were slaves, but for the past few generations the Graves family has been a part of the Blades of the Rose, a group of men and women intent on protecting the world’s magic from those who would seek to harness it for themselves. Catullus himself is even more eccentric than the rest of his family; he’s a genius inventor with a taste for fashion and a shyness around women.

Bold, brilliant Gemma Murphy tempts Catullus in ways he’s never before experienced, but he can’t afford to be distracted by the beautiful reporter. The Heirs of Albion – a cult of British supremacists who want to use magical Sources to take over the world in the name of England – have unlocked the most powerful Source of all. The fate of the world hangs in the balance as good battles evil. And two strangers with a powerful attraction might just be the ones who tip the scales.

The dynamic Blades of the Rose series reaches its climax in Stranger. Zoë Archer has built up Catullus all throughout the series, so I was eager to see everyone’s favorite genius fall in love. Happily, Gemma is his match in every respect while being quite different from Catullus in many ways. It was easy for me to become invested in their romance and I was thrilled to discover that – with all that goes on in terms of action in Stranger – Ms. Archer keeps the focus of the story centered on Catullus and Gemma.