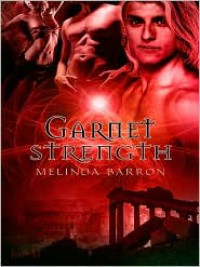 Witch Jalon Carr is on a mission to Rome to recover a mystical garnet, one of three magical stones stolen by dark forces who wish to release an evil witch from captivity. But Jalon isn’t alone on his quest, he’s part of a magical triad and only when the triad is whole can they recover the stone. Jalon has no problems falling for Gelsey, a beautiful faerie. It’s his attraction to the faerie Cian, the third member of the triad, Jalon has trouble coming to terms with. Though his body yearns for Cian, his mind can’t accept it. Will Jalon be able to break through his own barriers and make the triad whole? Or will his wariness be the break an evil witch needs to keep the garnet from the forces of good forever?

Treasure hunting just got a whole lot hotter with Melinda Barron’s newest addition to her scintillating Pentagram Stones series. Garnet Strength is a sexy, engaging tale I couldn’t put down.

Though the quest for the missing garnet is exciting, what fascinated me most about Garnet Strength is the relationship between Jalon and Cian. Ms. Barron drew me in with Jalon’s reluctance to accept his feelings for Cian. Jalon’s internal struggle, his honesty about it, and Cian’s patience with him captured my attention. The sexual tension was utterly delicious and when fulfilled…keep a fan handy. Garnet Strength is a m/m/f love story, so do not fear that Gelsey is left out. Yet while each member of the triad is in love with each other, to me, Gelsey’s part in the romance lacked the power of the sensuality and love between Jalon and Cian. Were it not for the fact that this was a triad story, I probably could have done without Gelsey which isn’t to say I disliked her, because she is very likeable character.

To give details on the triad’s search for the stone would be spoiling the book, so all I can say is that Ms. Barron adds some wonderful twists to the story and I am desperate to learn what happens. I cannot wait to see how the search for the bloodstone plays out in the next book. All in all, I must say that Garnet Strength is an enchanting addition to this already fantastic series. I adored this book and am practically on the edge of my seat waiting for the next Pentagram Stones story.
Tweet