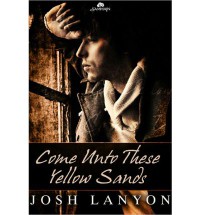 Sebastian Swift was once a poet better known for his literary genius heritage and self-destructive behavior than the lines he wrote. To everyone’s surprise – including his own – Swift is now a clean-living, well-mannered professor living in a quiet town in Maine. He’s even in a healthy, stable – if somewhat more casual than Swift would like – relationship with the town’s chief of police, Max Prescott. Then, on a seemingly normal day, Swift’s world comes crashing down around him. One of his best students, Tad Corelli, shows up at his office, beat up and on edge. Thinking only to help the young man, Swift hands him the keys to his Orson Island home…before discovering that Tad’s father has been murdered and Tad is a suspect.

Swift is convinced Tad is innocent, but he knows he needs to find Tad before Max learns that Swift accidentally aided the kid in escaping the police. But the road to hell is paved with the best of intentions and Swift’s relationship with Max is put to the test when his lover discovers that Swift lied to him. If missing Max and dealing with his own personal demons weren’t enough for Swift to handle, he’s now caught up in a murder mystery he has no interest in solving…one with a killer who seems to have made Swift his next target.

Josh Lanyon doesn’t just top the A-List – he IS the A-List when it comes to blending wit, suspense and romance. Mr. Lanyon’s at the top of his game in COME UNTO THESE YELLOW SANDS, an unforgettable story that will keep you entranced from beginning to end. As has happened with each story I’ve read, penned by Mr. Lanyon, I fell in love with the voice of COME UNTO THESE YELLOW SANDS. There’s an almost sprightly quality to the writing that buoys the story along, even in its darker moments. As for its protagonists, Max completely charmed me from the start. I could see why Swift fell for him and, even though the story is told entirely from Swift’s point of view, I didn’t feel like I missed out on getting to know Max. As for Swift, he’s one of the most unique characters I’ve read in a long time. There is such brilliance to his character that I can’t help but smile when thinking about him…even long after I’ve finished reading - and re-reading - his story. He’s incredibly loveable, though that assertion would likely be surprising to him, which is part of his charm. He’s faced a lot of obstacles in his life and most of them are of his own making. To his credit, Swift isn’t one to pass blame or wallow in self-pity over the troubles he must face. The fact that he’s flawed and owns up to it makes him special. I feel I must also single out the fact that Swift is a recovering addict, since I commend Mr. Lanyon for how he handles that aspect of Swift’s character. To me, it seems like it would be difficult to have a hero who is a recovering cocaine addict without his struggles either being downplayed to an unbelievable point or having the problems said hero faces overpower the story. Mr. Lanyon perfectly balances Swift’s addiction with every other element in the book, which is part of the reason COME UNTO THESE YELLOW SANDS is such an incredible book.

As befitting a book with a poet hero, COME UNTO THESE YELLOW SANDS is filled with vivid imagery – I want to live in Swift’s house - and beautiful prose. It also has everything you could want in a story; a fast pace, intrigue, sensuality and love. I absolutely loved COME UNTO THESE YELLOW SANDS, and I can’t wait to read the next exciting story that Mr. Lanyon has to offer!