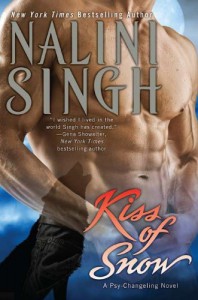 May Recommended Read. My review cross-posted from Joyfully Reviewed: http://www.joyfullyreviewed.com/recommended-reviews/may-2011-recommended-reads/kiss-of-snow-by-nalini-singh

In the world of the Psy, being anything other than cold and emotionless can get you killed – or worse. Sienna Lauren’s family defected from the PsyNet when she was a teenager, seeking refuge with the powerful SnowDancer pack. In Sienna’s case, life free of the Silence Protocol is both a precious gift and an incredible threat. For Sienna is an X-Psy, a rare designation whose powers leave her a ticking time bomb. Sienna can’t ever give into her powers, not when doing so would not only kill her, but everyone around her. At nineteen, Sienna is far older than her years. Nothing can shatter her control. Nothing except Hawke.

At fifteen, wolf changeling Hawke became alpha of a broken pack. His history is steeped in bloodshed, pain, and loss, but from that foundation he worked to make SnowDancer into one of the most powerful packs in the world. Though he loves his pack, Hawke is, in many ways, a lone wolf. Wolves only mate once and Hawke lost the girl who would be his mate during childhood. Yet something about the beautiful, brilliant Sienna calls to Hawke in a way he cannot push aside. She knocks him off balance, making him want things he knows he cannot – should not – have. So he puts distance between them, burying his desire for Sienna.

Only Sienna will no longer be ignored. She wants all or nothing and Hawke knows that if he turns her away, he’ll lose her forever. One kiss is all it takes for their passion to blaze out of control. But before Hawke and Sienna have a chance to explore what’s growing between them, an enemy launches a vicious attack that endangers everything the lovers hold dear. Soon they are in for the fight of their lives as a war unlike anyone has ever seen threatens to consume them all.

Listen up, Psy-Changleing fans: the book you’ve all been dying for is more than worth the wait! Kiss of Snow is a fast-moving, heart-pounding, sexy-as-hell thrill ride that will have you on the edge of your seat and begging for more.

Sienna and Hawke have been dancing around each other almost from the beginning of the series, so I had high expectations coming into their story. The sexual tension in Kiss of Snow is to-die-for, and when Hawke and Sienna get together the pages of the book burn bright and hot. Yet, despite the couple’s sensual appeal, the lighthearted moments between them are equally engaging. I don’t want to spoil the fun, but I will say that I wouldn’t mind “playing” with Hawke. Individually, Hawke and Sienna are characters you’ll fall in love with, even if you haven’t already. Both have had to take on the mantles of control, responsibility, and maturity at a very young age. It has shaped them and it also shapes their relationship. Hawke has a loving, fiercely protective nature that makes you swoon, even while you shake your head, knowing those same qualities will cause him to make mistakes with Sienna. Sienna, in turn, has incredible strength paired with a huge heart and I loved her for it. The two are made for each other, made to lead the pack, and made to win readers’ hearts.

In many ways, Kiss of Snow is not just Hawke and Sienna’s story, but the story of the Lauren family. Throughout the series, you’ve seen the love that bonds Sienna, her brother, cousin, and uncles together, but in Kiss of Snow you truly see them as a group. Their history is central to the story, as are their relationships with the changelings they’ve fallen in love with. Readers who loved Caressed by Ice will be thrilled to see more of Judd Lauren and his mate, Brenna. Kiss of Snow also features a romance subplot for Walker Lauren and SnowDancer healer Lara. I sighed and, I must admit, went a bit gooey over Walker and Lara’s story, for it was beautiful.

Nalini Singh’s talent for mixing romance with world-building continues to be unmatched. She takes this ability to new heights in Kiss of Snow as the war amongst the Psy spills over to that of the changelings and humans. There’s so much action, intrigue, and danger in Kiss of Snow that I’d love to talk about. However, I feel like giving anything away would ruin the excitement of the book, so I’ll simply say that Ms. Singh seamlessly weaves so much into the story that I was amazed.

Kiss of Snow is the thirteenth story (tenth full-length book) in the Psy-Changeling series. Ms. Singh provides enough information for new readers to follow along, but I wouldn’t recommend it. For me, the power of the story stemmed from my connection to all the characters involved and the world that I have come to love over the course of the series. I encourage readers new to Ms. Singh’s work to read at least the nine previous full-length books before reading Kiss of Snow. Slave to Sensation, Visions of Heat, Caressed by Ice, Mine to Possess, Hostage to Pleasure, Branded by Fire, Blaze of Memory, Bonds of Justice, and Play of Passion are all such incredible reads that you won’t regret holding off just a bit before reading Kiss of Snow.

For those who’ve already read and loved the previous Psy-Changeling books, you’re in for a real treat. Almost all the previous protagonists appear in Kiss of Snow, in addition to secondary characters that you know and love…and will come to love more. I mentioned before the importance of the Lauren family in this book, but don’t think that Kiss of Snow is all about the SnowDancer pack and their mates. The DarkRiver leopards are a big part of the book, and not just because of the increasingly close alliance between the two packs. Kiss of Snow features a subplot that continues the story of everyone’s favorite leopard alpha and E-Psy, Lucas and Sascha (of Slave to Sensation), as they start the next chapter of their lives.

Kiss of Snow is everything I hoped it would be and more, making it easy to enthusiastically recommend. There’s laughter and tears, hope and fear, love and loss. It’s such a “full” book that even saying as much as I have about it barely touches the surface. I loved Kiss of Snow, utterly and completely, and I Joyfully Recommend it!
Tweet