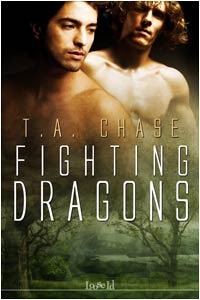 Everyone can see that Sergeant Bailey Stevenson and Captain David Wellmine are deeply attracted to one another. But Bailey, having been badly injured in Iraq, doesn’t see himself as particularly desirable and David has been living in his father’s shadow for so long he’s scared to come out and lose what little affection the man has for him. Good thing for Bailey and David they’ve got some meddling friends, one of whom is an elf. Irish magic is particularly strong on St. Patrick’s Day, and a spell lowers David and Bailey’s inhibitions, allowing them to finally connect. But when the spell ends, will David have the courage to stand up to his father so he can claim the life he could have with Bailey?

Fighting Dragons is one of those stories that is just simply beautiful to read. Its cast of characters quickly endeared themselves to me and the romance between David and Bailey warmed my heart even as the love scenes turned up the heat. What charmed me about Fighting Dragons is how quickly the characters, from David and Bailey to their friends, became real to me. I was so disappointed when I finished Fighting Dragons because I wanted more, not because the story was incomplete but because I hated to leave Bailey and David behind.

Fighting Dragons is the third story in T.A. Chase’s Dragons series, but readers new to the series, like myself, will be able to follow along. Still, with the heroes of the previous two books – Kael, Hugh, Mordred, and George – playing such prominent roles in Fighting Dragons, I’m sure new readers will also be racing to read Here Be Dragons and Dreaming of Dragons, just like I am.

I absolutely loved Fighting Dragons and I cannot wait to read the first two books in the series while I cross my fingers in the hope that T. A. Chase has more Dragons stories planned.
Tweet