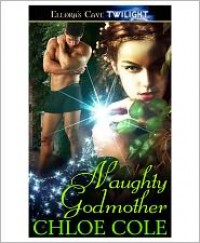 Holly Tucket was very happy as a tooth fairy, but you can’t say no to the queen when she decides it’s time to promote you, so Holly is now officially a Naughty Godmother. It’s her job to help hapless nerds become the kind of men women drool over. Her first assignment is Alex Nelson, a geek who definitely needs to get laid. There’s just one little thing Holly doesn’t know…

Alex Nelson is really undercover security expert Alex Nichlaus, and he needs no help whatsoever in the sex department, other than the fact that his cover has kept him celibate for months. He’s almost finished with the assignment when Holly lands on his balcony. Alex is sure the whole “Naughty Godmother” bit is a joke orchestrated by two of his co-workers, but Holly’s too tempting to send away. Can he keep up the ruse that he needs her sensual guidance? And how far will this woman claiming to be a fairy take her “assignment”?

Naughty Godmother is a wicked little fairy tale that sizzles. Chloe Cole keeps things fast and fun as Alex and Holly heat up the page. The obstacles in Naughty Godmother are created by the characters themselves, as Alex doesn’t believe in the supernatural and thinks Holly’s making the “being a fairy” bit up while Holly, in turn, isn’t aware that her charge needs no help in the sex department. Holly’s awkwardness endeared her to me and the dash of comedy said awkwardness caused mixed in well with the story’s erotic nature. It was easy to root for Alex and Holly’s romance and that kept me eagerly reading Naughty Godmother. All in all, I enjoyed Naughty Godmother and look forward to reading more of Ms. Cole’s work.
Tweet