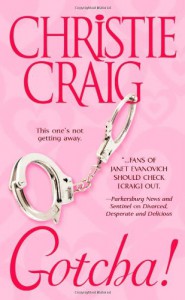 Macy Tucker has never had the best luck with men. First her grandfather drops dead in his spaghetti, then her father abandons their family, and then Macy catches her husband cheating on her. To top it all off, her well meaning but not always thinking brother, Billy, winds up in prison and steals a violent inmate’s girlfriend. When said inmate breaks out of prison, Billy follows in order to protect his girlfriend and Macy, bringing the most frustrating man to date right to Macy’s door. Sergeant Jake Baldwin may be sexy-as-sin, but he’s also bent on interfering with every aspect of Macy’s life until Billy is found. When it becomes clear Macy’s life is in danger, Jake’s protective instincts are roused, drawing him and Macy closer together. But will Jake’s desire for her be enough to make Macy risk her heart for a chance to break her bad luck streak with men?

Sparks fly in Christie Craig’s delightful new caper. Gotcha! is a thrilling read, packed with action, danger, and romance. Ms. Craig has created a unique cast of lively characters who both charm and entertain. Macy is a heroine I like and respect. She’s smart, hard working, and loving, in spite of having been hurt time and time again. Jake too has a past that has left its mark on him, making him wary of love and me all the more eager to see him find it with Macy. Though he presents a hardened façade, Jake truly does possess a caring soul, which shines through the walls he tends to put up. Macy’s family rounds out the story and Ms. Craig makes them every bit as memorable as Macy and Jake. I should mention that Jake and Macy aren’t the only ones who find love in Gotcha!, but I’ll leave it to readers to discover who else finds happiness along the way, for that’s half the fun of the story.

From beginning to end, Gotcha! had my undivided attention. It’s fast-paced, fun, and filled with endearing characters who are sure to capture your heart. Ms. Craig never fails to pen a fabulous tale, and Gotcha! is no exception. Engaging and romantic, Gotcha! is not to be missed.
Tweet