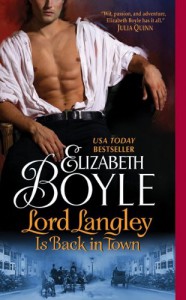 All of London believes Lord Langley to be dead…and a good number think he might be a traitor as well. Neither is true, though someone has done their level best to kill Langley and frame him for treason. Having escaped a French prison, Langley is back in Town, ready to clear his name and reclaim his life. To do that, he needs a level of respectability, and how better to attain it than to arrange an engagement to one of society’s most proper widows? Minerva Sterling suits his needs perfectly – especially since they happen to be living in the same house. Too bad he can only get her to agree to a faux engagement. Still, to Langley’s delight, the beautiful widow isn’t quite as staid as her façade presents. But how can the rakish Langley convince Minerva to take a chance on him when he’s targeted by a ruthless killer and a house full of ex-mistresses?

A charming rake falling for a respectable lady is hardly a new plot device, but Elizabeth Boyle makes it feel fresh in Lord Langley Is Back in Town. I was utterly charmed by the pairing of Minerva and Langley, for the two just seemed to click in a wonderful way. The slow-burn of their romance kept me eagerly turning the pages of Lord Langley Is Back in Town. I will admit, however, that it took me a while to get to the point where Minerva and Langley were the dominating forces in the book, so Lord Langley Is Back in Town was a bit of a slow starter for me. Minerva and Langley’s story is hindered by an abundance of loud characters, most of whom are former mistresses of Langley’s who, for some reason, Minerva can’t seem to kick out of her house. I admit to having to take a few leaps of logic in this area, but since I generally enjoy Ms. Boyle’s books, I was willing to do so.

Lord Langley Is Back in Town is the third book in Ms. Boyle’s Standon Widows trilogy, which is a subset of her Bachelor Chronicles series (of which this book is number eight). Having not read the other two Standon Widows books (How I Met My Countess and Mad About the Duke), I did feel like I was missing something. And oddly enough, with the plethora of Bachelor Chronicles characters that appear in this book, Langley’s daughters are relegated to only a few pages, though Felicity (of Love Letters from a Duke) is frequently mentioned. I will concede that my disappointment in this area likely stems from the fact that Langley’s daughter Tally (of Confessions of a Little Black Gown) is my favorite heroine of Ms. Boyle’s, so I felt her absence more keenly than I would had I not read her book.

Lord Langley Is Back in Town is a solidly entertaining read, if one doesn’t try to pick it apart and examine it too closely. It’s not the best book by Ms. Boyle, but Minerva and Langley are a charming couple nonetheless and I was happy to see them so well matched with one another.
Tweet