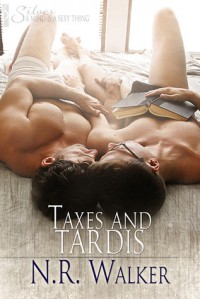 I love romance (m/m, m/f, f/f, or any combination thereof) and I love Doctor Who, so of course I was excited to read Taxes and TARDIS. But with a title and a premise shamelessly meant to pull in geeks, it really annoyed me that the author kept calling the show Dr. Who rather than Doctor Who. The titular character of the show is called The Doctor, not Dr. Who and in fact, "Dr. Who" is another creation entirely. Blah, blah, blah - non-Whovians are probably tuning out by now so I'll leave it at that. Is this a minor detail? Probably. But it's also something a two second Google search by the author or her editor(s) could have resolved. Indeed, with the copyright attribution in the book it's clear that someone must have seen the correct show title. So why the careless editing?

Titles and Time Lords aside, the story itself didn't pull me in, so this one's a DNF for me. And since I didn't finish it, it isn't fair of me to rate the book. Perhaps I'll try Taxes and TARDIS again some other time, but I'm not in a rush.
Tweet