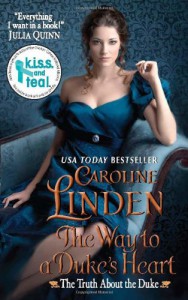 Charles de Lacey, Earl of Gresham, was born and raised with one goal in mind: to prepare him for the day when he would become the Duke of Durham. However, just before he died, the previous duke revealed a shocking secret: he was married to someone before he married Charlie’s mother…and he never divorced his first wife. On top of that, someone is blackmailing the de Lacey family – someone who knows of the deceased duke’s secret. Charlie must discover who the blackmailer is, for it is the only lead he has on his quest to determine whether or not he will inherit the title he was born to take. His youngest brother has tracked the blackmailer as far as Bath, and now the one link Charlie has to the blackmailer is beautiful widow Tessa Neville. Charlie’s drawn to the spirited Tessa, but with his fortune, reputation, and title at stake, can he put his trust in a woman who may be a co-conspirator in the plot to ruin him?

The truth about the duke is finally uncovered in The Way to a Duke’s Heart! Caroline Linden has delivered a wonderfully entertaining conclusion to the de Lacey family series with Charlie’s book. I admit, I had high expectations of Charlie after seeing him in his brothers’ books (One Night in London and Blame It on Bath), and happily, Charlie more than lived up to my hopes for him as a hero. On the surface, he’s a carefree, rakish lord. Beneath the genial façade, however, lies a man who’s been hurt numerous times by his father, the man he looked up to. Charlie needs someone to love him and stand by him, and Tessa is just the woman to do so. Tessa is as brilliant as she is beautiful, an atypical Regence-era woman who struggles against sexism. Just as Charlie needs a partner like her, Tessa needs a partner like Charlie; one who respects and admires her intelligence, and doesn’t let others get away with giving Tessa less than her due. Tessa and Charlie make a wonderful couple who fit one another in every way, making it easy to fall in love with The Way to a Duke’s Heart.

Aside from the romance, what I was looking forward to the most in The Way to a Duke’s Heart was Charlie solving the series-long mystery of what happened to Durham’s first wife. Are the de Lacey brothers legitimate? Well, I wouldn’t dream of spoiling the book by telling you. I will say that – had I not liked Charlie, Tessa, and Tessa’s elderly cousin Eugenie so much – I would’ve been tempted to speed through a lot of the book because I so desperately wanted to find out the answer. Ms. Linden definitely makes the outcome worth the buildup, though.

There’s a lot riding on The Way to a Duke’s Heart since it’s the conclusion of the series, and I applaud Ms. Linden for making the story work beautifully both as a standalone and as part of the Truth About the Duke series. While you don’t have to have read One Night in London and Blame It on Bath to enjoy The Way to a Duke’s Heart, I highly recommend reading them for their own merits, along with the prequel to the series, I Love the Earl, a fantastic romance involving Charlie’s aunt.

The Way to a Duke’s Heart is a lovely book that is sure to delight readers. I simply adored Charlie and Tessa’s romance and I highly recommend the Truth About the Duke series to anyone who enjoys smartly-written historical romances.
Tweet