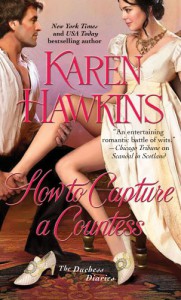 As a young woman, Rose Balfour desperately wanted to catch the attention of the rakish Lord Alton Sinclair. Knowing proper young society misses would never capture the earl’s interest, Rose pretended to be more worldly than she was. Until things went a bit too far and Rose panicked and pushed Sin into a fountain, leaving him to the mockery of his peers while she fled.

Six years have passed since that fateful day, but Sin hasn’t forgotten the woman who humiliated him. When he learns that his aunt, the Duchess of Roxburghe, is Rose’s godmother, he convinces the duchess to invite Rose to her annual house party. Yet when Sin meets Rose again, he finds he cannot resister her any more than he could six years ago. Sin is determined to seduce and ruin Rose, but will his plan for vengeance be thwarted by his own heart?

How to Capture a Countess is a bit of a problematic book to review. I love the premise of the series: the fascinating, crafty Duchess of Roxburghe is determined to find matches for the three Balfour sisters. Indeed, the duchess brings energy and common sense to How to Capture a Countess in every scene she’s in, making her (in my opinion) the true heroine of the book. Sadly, though Karen Hawkins made me adore the duchess, I had a bit of a problem liking the book’s intended hero and heroine. Rose was a likeable, intelligent woman, but it was hard for me to connect with her when she fell in love with – and makes excuses for – a man who wasn’t worthy of her. For most of How to Capture a Countess, Sin acts like a child. I can see why he’s still angry about the damage done to his reputation. However, his continued quest for vengeance – after he (1) he learns that Rose could have had no idea what her actions brought about and (2) he can see she’s truly apologetic for things that weren’t even mostly her fault – irritated me. Sin’s focus on ruining Rose makes him seem petulant, childish, and mean. Unfortunately, he acts this way for much of the book. The fact that Rose accepts and even seems to think she’s earned his continued wrath made me want to throw How to Capture a Countess across the room a few times. By the time the book reached its conclusion, I just couldn’t bring myself to cheer for Rose and Sin’s “happily ever after.”