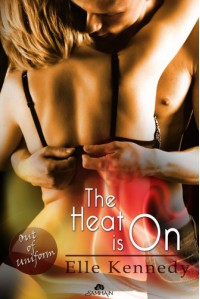 Since Matt O’Connor’s former roommate joined the rest of his friends on the path to love, marriage, and babies, Matt has been feeling a bit lonely. Not that he has any intention of giving up his no-strings-attached sex lifestyle. Matt’s happy with his status as the bad boy of SEAL Team Fifteen. Then he meets Savannah Harte. The beautiful blonde knocks Matt of his feet and her attitude toward sex matches Matt’s. She wants sexy thrills and no commitments. The minute things start to change, she’ll take off. They should be a match made in heaven. Except that, for the first time, Matt finds himself wanting something more than a red-hot fling. Can Matt convince Savannah that love could be the biggest thrill of all?

I adored The Heat is On from beginning to end and the only sad part (for me) was that the last single member of the current SEAL Team Fifteen has fallen in love. Still, I’m hoping Ms. Kennedy continues the Out of Uniform series. There’s a certain Navel Intelligence officer that captured my interest, even as he joined Savannah and Matt in bed. Whether or not there are more Out of Uniform stories to come, I know I’ll be curling up with Savannah and Matt’s story again in the near future. As with all the Out of Uniform books, The Heat is On is a wickedly entertaining read.
Tweet