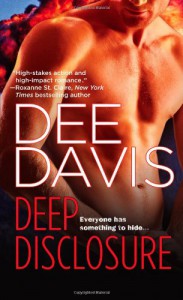 My review is cross-posted courtesy of Wit and Sin: http://witandsin.blogspot.com/2011/10/review-deep-disclosure-by-dee-davis.html

After his release from a Columbian prison, black ops agent Tucker Flynn took to the quiet life. Just when things are about to get boring, an explosion in a local coffee shop leads him to cross paths with Alexis Markham. Years ago, Alexis’s father developed a biochemical weapon and Alexis’s entire family was murdered to keep that formula a secret. Now Tucker must protect her, without disclosing his true identity.

Alexis has been on the run for thirteen years, trying to escape those that want her father’s formula. She’s been taught to trust no one, especially the government. So when Tucker appears and appoints himself her bodyguard, she’s understandably suspicious. Even so, Tucker manages to work his way past her defenses and soon she’s falling for her sexy bodyguard and the safety he promises. But if a killer has his way, Alexis and Tucker’s burgeoning relationship may end before it can truly begin.

I’m a hard sell when it comes to romantic suspense, but I was taken with Deep Disclosure. Dee Davis keeps the action going almost nonstop and adds a few twists for good measure. I enjoyed the suspense part of the book even more than the romance, which is a rarity for me. That’s not to say that Alexis and Tucker are boring; they aren’t in the least. Both of them are survivors, and I respected that. Their relationship was the weaker of the two storylines, but I liked watching them fall for each other nonetheless.

Deep Disclosure is the fourth book in Ms. Davis’s A-Tac series. Having not read, Dark Deceptions, Dangerous Desires, and Desperate Deeds, I can safely say that Deep Disclosure can be read out of order in the series. Still, Ms. Davis definitely made me want to go back and read the first three A-Tac books. In fact, I’ve bought them already. I can’t wait to read more A-Tac books and I am already dying for the sexy A-Tac commander, Avery, to get a story of his own.