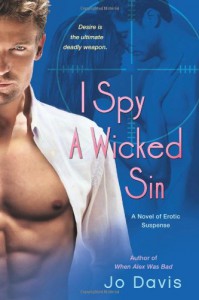 My review is cross-posted from Joyfully Reviewed: http://www.joyfullyreviewed.com/reviews/Feb10/ispyawickedsin.jd.html

Lily Vale isn’t everything she seems. An agent for SHADO, a covert homeland security agency, Lily has been sent to find information and take out a former SHADO assassin who has turned traitor. But immediately upon meeting Jude, Lily knows something’s off. The Jude she comes to know is many things, but a monster isn’t one of them. It’s up to Lily to unravel the puzzle and find the true traitor before her sensual adventures with Jude come to a crashing, deadly end.

Hedonism is the name of the game in this first, aptly-titled SHADO Agency novel from Jo Davis. I Spy a Wicked Sin scintillates with one naughty erotic encounter after the next. The passion is underscored by the mystery of Jude’s past intersecting with Lily’s current assignment, adding an element of non-sexual thrill to the story. While the wicked games Lily, Jude, and others play ratchet up the heat level, what captured me about I Spy a Wicked Sin was the likeability of the characters. From Jude and Lily to Liam, Jude’s best friend and frequent lover, and others, the majority of the characters in the book were endearing, which more than anything is why I was so invested in the tale.

I Spy a Wicked Sin starts off Ms. Davis’s SHADO Agency series with a bang and I look forward to seeing what comes next. In particular, I find myself intrigued by Michael Ross, the grief-stricken widower and head of the SHADO Agency. This is the first book I’ve read by Ms. Davis and I will definitely be looking forward to reading more SHADO Agency tales. In the meantime, I’ll be on the hunt to glom up Ms. Davis’s backlist.
Tweet