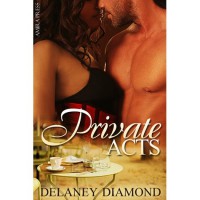 While working in Ecuador, Samirah Jamison has vowed to stay focused, meaning no men allowed. But temptation has never been as hard to resist as when it is in the form of hard-bodied artist Miguel Delgado…especially when the sexy-as-sin sculptor seems determined to pursue Samirah at every turn. What harm can there be in a little fling? Plenty, Samirah fears, if her heart becomes involved.

Author Delaney Diamond turns up the heat in PRIVATE ACTS. I definitely added Cuenca, Ecuador to my list of places I want to visit after reading this book. As for the story’s protagonists, Samirah has a bright, open personality that draws people to her, readers included. It’s easy to see why Miguel falls hard and fast for her. It’s equally easy to see why Miguel, with his talented hands, makes Samirah want to break her personal “no men” rule. The sexual tension that brews between them makes the first part of PRIVATE ACTS a lot of fun. That being said, I did have a bit of a problem with Miguel’s attitude change approximately halfway through the story. He goes from being dominant to being all-out overbearing when it comes to Samirah, particularly when he’s determined to “teach her a lesson.” For me, a major chunk of his sex appeal disappeared when Miguel became too controlling. That being said, Ms. Diamond does a pretty good job of redeeming him at the end of PRIVATE ACTS. There’s a scene in the last chapter that definitely went a long way in making me like Miguel again.