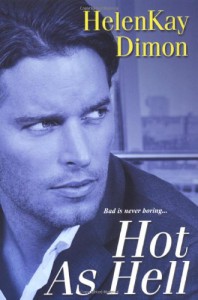 My review is cross-posted from Joyfully Reviewed: http://www.joyfullyreviewed.com/reviews/Oct09/hotashell.HD.html

Lexy Stuart has had it with her fiancé, Noah Paxton. He may be smart and insanely gorgeous, but he keeps secrets from her; secrets like the fact that he was married once before. With that not-so-little straw breaking the camel’s back, Lexy packs up and heads off to a fitness spa in southern Utah. Fortunately, or unfortunately for Lexy, Noah is hot on her heels. He’s determined to bring her back with him, and he’s not leaving until she agrees to marry him again. Arguments lead to heightened sexual tension and when a dead body turns up in Lexy’s room at the resort she has no choice but to ask for Noah’s aid in discovering who the killer is. Being in close quarters leaves little room for resisting old passions and emotions that never did die. Lexy and Noah’s time in the desert is about to get a whole lot hotter.

I have a confession to make: I picked up Hot As Hell because I liked the cover. Happily, this book proves that you sometimes can judge a book by its cover. HenlenKay Dimon has penned a sexy, exhilarating tale with a hero who is, indeed, hot as hell.

I love Noah. He was intelligent, protective, and sinfully good looking. Yet Noah isn’t perfect. His past has left its mark on him, and while it causes Noah to make mistakes in his relationship with Lexy, my heart broke for him all the same. Lexy, however, took a while to grow on me. While I understood why she left Noah in the first place, after a while her words and actions were not only desperate, but felt unreasonable as well. Perhaps this is because I also saw things from Noah’s point of view, but nevertheless I was impatient with Lexy at times. Yet, the end, her love for Noah won me over and I was unable to put Hot As Hell down because I wanted to see the two find happiness with one another.

Danger around every corner lends excitement to the tale. It also brings in a few intriguing characters, one of whom is Lexy’s brother, Gray. I hope Ms. Dimon writes a book for Gray one day, particularly if the sparks between him and a certain blonde police detective lead anywhere. Overall, I enjoyed Hot As Hell. It’s a wickedly sensual, action-packed romance that is truly entertaining.
Tweet