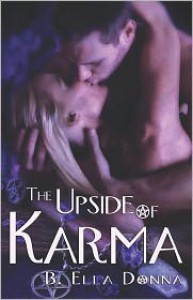 My review is cross-posted from Joyfully Reviewed: http://www.joyfullyreviewed.com/reviews/Nov09/theupsideofkarma.bed.html

When the ghost of the man who nearly killed her last summer appears, it’s only the beginning of the problems for witch Angelica Kane. In addition to being followed around by a ghost intent on working off his karmic debt, Angelica finds out that her husband, Jon, is having an affair. When the woman he was sleeping with turns up dead and Jon is arrested, things go further south. Despite his philandering, Angelica knows she has to prove Jon’s innocence, and to do that she needs the help of Sean Bennette, the detective investigating the murder. With the help of her sister witches, Angelica is on the hunt for the real killer. But in her quest for the truth, Angelica learns things that have the ability to bring her world crumbling down around her…and the power to bring her the greatest love she’s ever known.

Danger lurks around every corner in this enchanting offering by B. Ella Donna. The Upside of Karma is an engaging, satisfying read with characters who feel like they could live right next door to you. I really liked Angelica; she’s a sensible woman who puts her children and friends first. She doesn’t put up with Jon’s cheating, but that doesn’t mean she doesn’t still care for him, nor does it stop her from trying to prove his innocence. As for Angelica’s true love interest, Sean is gorgeous and giving. He’s willing to do anything to make Angelica find happiness, even if it’s not with him. Their road to happily ever after isn’t instantaneous nor is it smooth, but The Upside of Karma is the better for this.