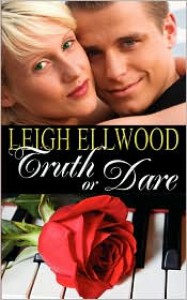 My review is cross-posted from Joyfully Reviewed: http://www.joyfullyreviewed.com/new-reviews/truth-or-dare-by-leigh-ellwood

Rock star Brady Garriston needs to jump start his career and – after his girlfriend dumps him – his love life. Brady knows he needs to get out of New York City and he thinks the answer to all his problems can be found in the small town of Dareville, Virginia. Brady intends to keep a low profile in Dareville by posing as Gary Stone, but his ruse is hard to keep up when he meets Ellie Shaw, the cousin of the girlfriend Brady wants back. The fact that Ellie looks like his ex is a mark in her favor, and Brady hopes to win Ellie over in order to woo his ex. But soon Brady finds that it’s Ellie he wants, not her cousin. It’s also Ellie who inspires him like no other. That may be all well and good for him, but what will happen when Ellie learns the truth of his deception?