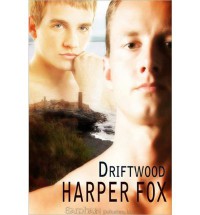 My review is cross-posted from Joyfully Reviewed: http://www.joyfullyreviewed.com/new-reviews/driftwood-by-harper-fox

Dr. Thomas Penrose hasn’t been the same since coming back from Afghanistan. Haunted by the past, Tom maintains a strictly ordered existence that is upended when he rescues a surfer. Flynn Summers is a disaster waiting to happen. One of two survivors of a crash that killed his crew, Flynn seems to believe he doesn’t deserve happiness and he pays a sort of penance by staying in an abusive sexual relationship with fellow crash survivor, Robert. Attraction burns bright and hot between Tom and Flynn, but for them to have a chance at a relationship, they have to overcome their respective pasts…before it drowns their present.

I love a good tortured hero and Driftwood has not one, but two. What captured my interest about Driftwood is that Harper Fox bases her heroes’ torment in realism. War, Post Traumatic Stress Disorder, survivor’s guilt, Obsessive Compulsive Disorder, and abuse all come into play in Driftwood and Ms. Fox deftly handles each one, seamlessly weaving them into the story. At its heart, however, Driftwood is a lovely romance, one that kept me avidly reading. Tom and Flynn so deserve to find happiness with one another, for each is an honestly good, caring man. But with the odds stacked against them, Ms. Fox had me on the edge of my seat for the majority of the book, which made for a captivating read.

Sensual, seductive, and at times hauntingly beautiful, Driftwood was a wonderfully satisfying read. It’s the first book of Ms. Fox’s that I’ve read and it won’t be the last.
Tweet