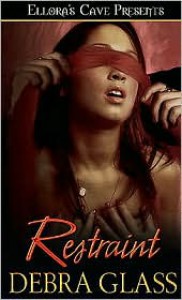 My review is cross-posted from Joyfully Reviewed: http://www.joyfullyreviewed.com/reviews/Oct08/restraint.DG.html

Thomas Collins, the Earl of Claymore, has just accepted a job he isn’t sure he’s prepared for. At one time, Thomas was famous for schooling frigid wives and shy mistresses in the art of lovemaking. However, the one-time rake has long since retired his ways, and since the death of his wife has ignored the needs of his body and sealed away his heart. But all that changes when he accepts an offer from the Duke of Wallingford to seduce the man’s fiancée. The only catch is that Thomas cannot take the woman’s maidenhead.

Lady Catherine Spencer wakes up to find herself bound to a bed and blindfolded. She’s told of her repulsive fiancé’s deal, but despite her genteel upbringing, Catherine can’t seem to resist Thomas’s touch. As the two delve deep into lessons of desire, irresistible passion ensnares them both. Can Catherine teach Thomas to love again? Or will he be successful in his attempts to restrain himself from breaking his deal and making Catherine his?

Have those fans ready because Restraint is sure to leave you flushed and hot! Debra Glass weaves a seductive tale of romance as Thomas learns what it means to open his heart again and Catherine finds she can trust her instincts and fall for her mysterious “tutor.” While Restraint has numerous love scenes, I didn’t feel that they were ever repetitive. Indeed, each one moved the story forward to the book’s—for lack of a better word—climax. Both Catherine and Thomas were likeable characters and Wallingford was sufficiently distasteful that I was rooting for the hero and heroine to achieve their happily ever after. A luscious tale of romance set in nineteenth century England, I found Restraint to be, quite simply, irresistible.
Tweet