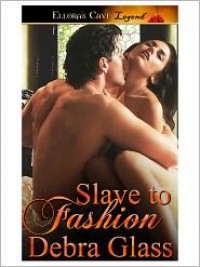 My review is cross-posted from Joyfully Reviewed: http://www.joyfullyreviewed.com/new-reviews/slave-to-fashion-by-debra-glass

Georgiana Talbot isn’t your average London miss. She’s a renowned modiste, one wholly concerned with the success of her business and making advantageous matches for her sisters. When Blane MacLaren, Laird of Lockerbie, tries to convince Georgiana to buy the linen from his mills instead of from the man Georgiana wants her sister to wed, Georgiana scoffs. But Blane tempts Georgiana to consider his offer with the promise of fulfilling her darkest desires. For once, Georgiana wants something just for herself. And that something is Blane MacLaren.

Debra Glass is one of the premiere names in erotic historical romance as far as I’m concerned and it was with great delight that I picked up Slave to Fashion. I love that Georgiana is different from the typical Georgian era heroine – it adds spice to the tale. Also adding spice to Slave to Fashion is the dynamic between Georgiana and Blane. They don’t always like each other…at least not at first…but the sparks that fly between them are undeniably hot. Ms. Glass’s talent for writing melting sexual tension and decadent eroticism is showcased beautifully in Slave to Fashion. Though Slave to Fashion is slightly hampered by a bit of a quick wrap-up at the end, all in all it was a pleasure to read and, as always, I look forward to reading more of Ms. Glass’s work.
Tweet