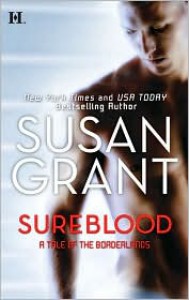 My review is cross-posted from Joyfully Reviewed: http://www.joyfullyreviewed.com/new-reviews/sureblood-by-susan-grant

The pirate clans rule the Channels region of the Borderlands, but it’s been a long time since the clans were united. Raid crashing, tempers, and prejudices keep clans like the Blues and the Surebloods fighting. Then a mission throws Valeeya Blue into the path of Dake, leader of the Surebloods, and the unexpected happens. Attraction sparks and the idea of peace between the clans suddenly becomes possible. But Val and Dake’s relationship ends before it really has a chance to begin when Val’s father, the Blues’ clan leader, is murdered. Val’s clan blames the Surebloods and when Dake disappears, it seems he truly is guilty.

What Val doesn’t know is that Dake was ambushed and imprisoned before he had a chance to clear himself and his clan. Five years later, Dake has been freed and he returns to Val to find her a changed woman. Val is now the leader of the Blues and she’s hardened herself to him…or so she thinks. But when a mutual enemy threatens to expose and eliminate a secret Val has been holding dear, she must join forces with her former lover and put the past behind her, or there will be no future for her to have with Dake.

Enjoy a ride as thrilling as any pirate raid in space adventure Sureblood. I admit, I’m not generally a sci-fi fan, but Susan Grant drew me into the world of the Borderlands. Ms. Grant perfectly mixes romance, courage, hardship, deception, triumph, loss, and hope to deliver a fast-paced, engaging story that is sure to entertain fans new and old. Val and Dake are both likeable, hard-working protagonists who do their best in often less than ideal situations. Their road to happily ever after isn’t an easy one, but I liked them so well together that I couldn’t put Sureblood down until I was sure they’d get their happy ending.

Sureblood is the third book in Ms. Grant’s Borderlands series, but not having read the first two books (Moonstruck and The Warlord’s Daughter), I can safely say Sureblood can be read as a standalone. However, after enjoying Sureblood as much as I did, I’m definitely looking forward to reading the other Borderlands tales, as well as other works by Ms. Grant.
Tweet