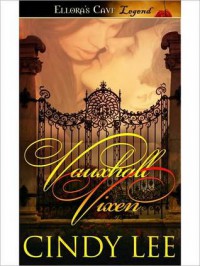 David Huntley, Viscount Maxton’s nights are filled with haunting dreams of a mysterious, veiled woman who makes love to him in the middle of a garden. Imagine his surprise when, on his first trip to Vauxhall Gardens, he finds that his fantasy woman is a flesh and blood courtesan!

Vivian Cassell has come to London with the express purpose of making enough money for her and her mother to retire to a cottage in the country. To do so, Vivian has come up with a plan to make herself stand out. Wearing a veil for anonymity, she presents herself as the “Vauxhall Vixen.” But her first night as a courtesan takes an unexpected turn when her client is too drunk to perform and she meets the sensual Viscount Maxton. There’s something about David that calls to the romantic in Vivian, but is a happy ending possible for an English lord and the Vauxhall Vixen?

Fate – and two perfectly-matched libidos – takes charge in the scintillating Vauxhall Vixen. Cindy Lee will sweep readers away to Regency London and satisfy any cravings for sensual encounters and fantasies fulfilled. Yet while Vauxhall Vixen is wonderfully wicked and its protagonists eminently likeable, there was something stilted about the way Vivian and David conversed, which drew me out of the story at times. Aside from a more smooth-flowing dialogue, I would have wished for some of the plot to take place outside the sex and would have liked to see a slightly less rushed ending. Still, Ms. Lee pens an enjoyable tale and I delighted in taking a walk down the darker lanes of Vauxhall with David and Vivian.
Tweet