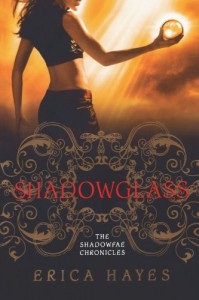 For waterfae Ice, just surviving in Melbourne’s paranormal underworld is a lot of work. Ice is a thief and a con artist, but she can barely make ends meet and she’s overdue on protection payment to the local vampire mafia. So when Ice has a one night stand with the demon lord Kane and spies a magic mirror, she steals it. Unfortunately for Ice, the mirror isn’t just a shiny showpiece; it possesses a powerful magic, one that threatens to drive her mad.

Metalfae Indigo is the one who stole the mirror for Kane and now he’s in a bind. He has to steal the mirror – again – return it to its owner, and kill Ice, or face a fate worse than death. Indigo can’t bring himself to destroy the fairy he desires above all others. But with demons at their back and mirror-induced madness at their front, it’s clear that the clock’s ticking for both Indigo and Ice.

Erica Hayes has a dark, gritty, wonderfully imaginative idea in Shadowglass that – like its predecessor in the Shadowfae Chronicles, Shadowfae – falls flat in execution. Reading Shadowglass is like being in an all-night rave…for weeks on end. It’s bright, loud, shallow, and just too much. There’s very little depth to be found in any of the characters, which makes sense for the fairies on some level because of their nature (though it doesn’t explain the one-dimensional nature of the non-fae characters), but it makes it hard to become invested in the story. After finishing the story, the most I could really remember about Ice as a character was that she whined a lot in the beginning about being completely unattractive and no man wanted her so she got the leavings of her beautiful best friend…which I remember mostly because every major male character – except for the hero of the third book – wanted to have sex with her.

What I also struggled with while reading Shadowglass was the fact that everyone seemed to need a shower, detox, and an attitude adjustment. There is so much drama between Ice and her two best friends that I felt like I was back in high school. Part of this can be explained away by the mirror’s powers, but not the majority of it. The romance between Indigo and Ice seems to be almost a token element in the story, especially since Indigo seems to fade into the background for most of the book. There’s a lot of sex in the story, but it’s no spoiler to say that much of it involves Ice and not Indigo. Though there was probably more sex in the first book, unlike in Shadowfae, the sex scenes in Shadowglass felt excessive and started to get on my nerves. Furthermore, the shifting narrative, from first person to third person point of view in Shadowglass added to the somewhat disjointed feeling of the book as a whole.

Shadowglass is erotica meets urban fantasy, but though the bones of a great story are in there, it just didn’t work for me. And after reading the interactions between Mina and Joey, the hero and heroine of Poison Kissed, the next installment of the Shadowfae Chronicles, I think I’ll pass on reading more of the series. That is, unless Ms. Hayes writes a book for the fantastic demon lord Kane. I do think Ms. Hayes has some truly unique ideas and if she ever decides to write a book that is not part of the Shadowfae Chronicles, I’ll definitely give it a try.
Tweet