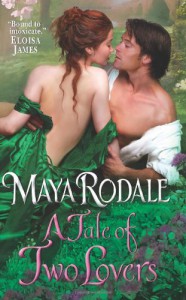 The rakish Lord Roxbury is a godsend to someone like Lady Julianna Somerset, gossip columnist for The London Weekly. And when Julianna spies Roxbury in a scandalous position with someone in men’s clothing…well, she’s sure she has the scoop of a lifetime! Only Roxbury doesn’t quite see it that way and he doesn’t take kindly to the lies the mysterious “Lady of Distinction” has written about him, particularly when his reputation is shredded and chances of marriage are ruined because of it. It’s not long before Roxbury and Julianna’s battle becomes public and all of London is agog. With both Julianna and Roxbury teetering on the ledge of complete ruination, there’s only one solution: the scandalous pair will wed. It’s supposed to be a marriage of convenience, but love and desire have a funny way of bringing together even the most reticent spouses.

Gossip and scandal pile up faster than a modern-day celebrity rumor-mill in A Tale of Two Lovers. Maya Rodale’s unique Writing Girls falters in its second installment, dragged down, as it were, by an incredibly unlikeable heroine. For the first third of A Tale of Two Lovers I attempted to find something to like about Julianna. After that, I simply tried (and failed) not to hate her. Julianna wears emotional scars thanks to her first husband, a vice-ridden rake. Because of this, and her eagerness to beat another gossip columnist, I understand her jumping the gun and writing a piece insinuating that Roxbury is interested in men. What I fail to understand is why – once she learns that she was wrong and sees firsthand how all but one of Roxbury’s friends completely turns on him – she persists in writing more pieces insinuating the same thing. Considering the laws targeting homosexuals during that time period, Julianna’s willfully misleading columns are not something that I could simply brush aside. Julianna, quite simply, comes off as a brat, one who blames Roxbury for everything that goes wrong in her life and takes out her frustration regarding her first marriage on him. She also insists throughout the book that she did nothing wrong and is not responsible for ruining Roxbury’s reputation. Yet, when her own reputation takes a hit, she seems to blame all and sundry for her own predicament which she, in part, caused. Were this in another story, Julianna would be a halfway-decent villain. I don’t catalogue Julianna’s faults to belabor the point, but rather to explain why I was so disappointed in A Tale of Two Lovers. Perhaps what irritated me about her will not bother other readers. Roxbury, on the other hand, is a perfectly likeable hero. He’s amiable, sensual, and when he makes mistakes, he owns up to them. The only thing I didn’t entirely understand was why he fell in love with Julianna.

Roxbury and the cast of secondary characters bring charm to A Tale of Two Lovers. It was nice to revisit Sophie and Brandon (of the first Writing Girls book, A Groom of One’s Own), but what delighted me the most was the glimpses of the other two Writing Girls, Eliza and Annabelle, and the men I sincerely hope will be their heroes. Though A Tale of Two Lovers was not the story for me, I still liked Roxbury and the supporting characters enough that I am looking forward to Eliza and Annabelle’s books.
Tweet