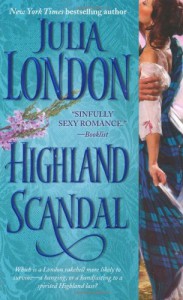 After being falsely accused of having an affair with the Princess of Wales, Jack Haines, Earl of Lambourne, is forced to flee to his native Scotland. With charges of high treason hanging over his head and the Prince of Wales’s men hot on his heels, Jack’s bad luck is compounded when he’s captured by Laird Carson Beal. What Jack doesn’t expect is Beal’s proposition. Either Jack enters into a handfasting – an ancient custom where a couple is effectively married for only a year and a day unless they decide to make it permanent – with Beal’s niece, Lizzie, or the laird will hand Jack over to the prince’s men. Jack’s wariness turns into acceptance when he meets Lizzie. Too bad she’s even less thrilled about the arrangement than he!

Elizabeth Drummond Beal is furious. Her uncle’s machinations are threatening to destroy her chance at a happy marriage. Yet she can’t help but be drawn to the rakish earl whose fate is now tied to hers. As Jack and Lizzie reluctantly start to work together to discover the real reasons her uncle is so eager to have them handfasted, desire begins to bloom between the pair. But will two such different souls be able to find enough common ground for a chance at a love that could last far beyond a year and a day?

Enjoy being swept away to the Scottish Highlands with Julia London’s tale of an unlikely romance between a feisty Scottish lass and the charming rogue who is her match. Highland Scandal is a delightful romp filled with both spirit and heart that I could not put down.

Lizzie and Jack have a somewhat antagonistic relationship to begin with. Though understandable, this slowed the story down a bit in the beginning. Happily, Ms. London picked up the pace and made me absolutely adore Jack and Lizzie. Each has been backed into a corner by the actions and accusations of others, and I was rooting for them to not only make the best of their situation, but to find love with one another in it. A dash of intrigue added by Lizzie’s unscrupulous uncle kept me reading Highland Scandal late into the night, eager for the intrepid hero and heroine to figure out and overcome his schemes.

Fans of Ms. London’s will delight in once again seeing Jack’s sister Fiona (who, in the Snowy Night with a Stranger anthology, found love whilst searching for Jack). Also, though Highland Scandal stands on its own, the Earl of Lindsey of The Book of Scandal does appear, as do Jack’s other friends, including the Duke of Darlington who is the hero of Ms. London’s next Scandal book, A Courtesan’s Scandal. Not having read the first Scandal book, I can definitely say I will be ordering The Book of Scandal and am most eager to read the next Scandal tale. All in all I found Highland Scandal to be an engaging, satisfying read that brought warmth to my heart and put a smile on my face. Simply wonderful!
Tweet