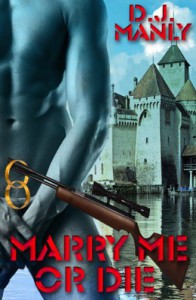 When the new emperor takes power on Laden, Silus knows everything will change – and he’s right. The emperor has declared that all males age eighteen and over must find a mate within the month or else face criminal charges. For Silus, who doesn’t believe love exists and has no interest in being trapped in a monogamous relationship, this decree is unacceptable. When he’s dragged before his judge, the emperor’s son Crash, Silus can’t believe what he’s told. Crash is in danger of violating his father’s rule, so he’s gives Silus an offer he can’t refuse – marry him or die.

Opposites attract in this sexy offering from D.J. Manly. Marry Me or Die is a red-hot read with heart I could not put down. I flat-out adored Crash. His brazenness combined with his romantic nature made him a sweet but strong-willed character, a perfect match for Silus. Silus, though stubbornly refusing to accept that love could be possible (at least in the beginning), was a good balance for the more buoyant Crash. They tempered one another as they both learned what it really means to love someone. I didn’t want to stop reading Marry Me or Die because I so adored Crash and Silus together and wanted to see them get their happily ever after. Fast-paced, fun, and sexy as hell, Marry Me or Die is not to be missed!
Tweet