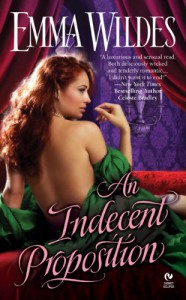 All of London is agog at the scandalous bet between the Duke of Rothay and the Earl of Manderville. Society’s two most notorious rakes have placed a very public wager on which of them is the better lover and everyone is most eager to learn the results…everyone save the duke and earl, that is. For Nicholas and Derek, the duke and earl in question, the illicit wager was nothing more than an impetuous result of too many drinks. But despite the many offers received to act as judge, none appeal to either Nicholas or Derek, save one.

Lady Caroline Wynn is the last woman anyone would expect to become involved in such a bargain. Though a young and beautiful widow, Caroline has an icy reputation meant to keep potential suitors at bay. While not desirous of a second husband after her first, horrible marriage, Caroline is eager to know what it would be like to experience true passion. And who better to teach her than Nicholas and Derek? If the duke and the earl are willing to keep her identity a secret, Caroline is happy to judge their contest and publish the results anonymously. But even the best-laid plans can go awry when playing with passion, if love gets in the mix.

Prepare yourselves for one of the most sensual, tender, beautifully written romances of the year with An Indecent Proposition. Emma Wildes has written an utterly engaging tale with characters that are sure to win your heart. I absolutely adored Caroline; it’s impossible not to. She’s both intelligent and kind, but is not invulnerable. Her horrible marriage has left its mark on her and I was eager to see her overcome the effects of her late husband’s cruelty. As for Nicholas, he is everything a hero should be and more. He’s seductive, handsome, and bright, but also human. In other words, he’s not perfect, which makes him all the more appealing. Events of his past have also left him wary of love, and with good reason. I couldn’t stop reading An Indecent Proposition because I so wanted he and Caroline to find happiness with one another.

An Indecent Proposition treats readers to not only one love story, but two. Very early in the tale we’re introduced to Annabel, the woman Derek loves and, by his own mistake, lost. This story is every bit as much theirs as it is Nicholas and Caroline’s and I couldn’t be more delighted, as they are both endearing, charming characters. Derek and Annabel’s love is one that has grown over time, versus the immediacy of Nicholas and Caroline’s and I loved the contrasts. Ms. Wildes deftly weaves the intertwining romances to create a seamless, flowing dual romance.