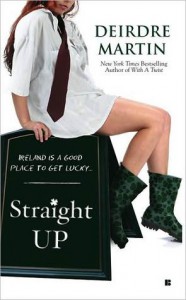 It seems to Aislinn McCafferty that, of late, all anyone in the small Irish town of Ballycraig can talk about is The Yank. Evidently Liam O’Brien, the new bartender at the Royal Oak, got on the bad side of New York’s Irish mob and is hiding out in his parents’ hometown until it’s safe for him to return to the States. Not that Aislinn cares. Ever since she was humiliated and abandoned at the altar, she’s turned inward and good luck to any man who tries to talk to her. Yet something about Liam interests her. Maybe it’s his devilishly good looks. Or perhaps it’s that he won’t leave her alone. Can Aislinn take a chance on love and open her heart once more? Or will a secret Liam’s keeping destroy her faith in him before their relationship ever has a chance to blossom?

Take a trip to the Emerald Isle to see opposites attract in the charming Straight Up. It might sound odd, but what interested me most about Aislinn was that she was a woman in a profession that’s unusual for a romance heroine. She’s a sheep farmer, and a hard-working one at that. Aislinn’s not a girly-girl by any stretch of the imagination and I loved that Liam adored her for who she really is. Liam himself is an extremely sexy hero, one whose mistakes keep him from being cardboard perfect. He and Aislinn work well together and I enjoyed watching them fall in love. If there was one thing I could wish for in Straight Up, it’d be that it was a bit longer. The book moves at a leisurely pace for most of the story, but the ending felt a bit rushed and patched together. Considering that the issues that needed to be resolved were done so at the end, this seemed a bit odd to me.

Straight Up is the third story in Deirdre Martin’s Wild Hearts Saga. When I picked up Straight Up, I wasn’t aware it was part of a series and thus I can safely say it reads perfectly fine as a standalone. Liam is close to his siblings (the protagonists of the other Wild Hearts books) and thus they are mentioned frequently in Straight Up and I admit I am intrigued enough to want to go back and read the previous two stories (“Luck of the Irish” in the Double the Pleasure anthology and With a Twist). All in all I found Straight Up to be an entertaining read and I look forward to reading more of Ms. Martin’s work.
Tweet