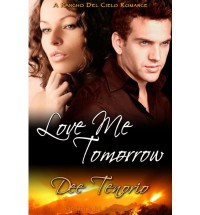 Everyone in the town of Rancho del Cielo knows that when Miranda McTiernan and Josh Whittaker are in the same room, sparks are sure to strike. The two can’t seem to stop arguing, nor can they stay away from one another. But after the tragic death of a friend, Miranda decides that now’s the time to get what she’s been longing for: a baby. She wants Josh to be the father, but he’s dead set against the idea. He also doesn’t want any other man touching her either. The two are at an impasse until it becomes clear that a serial arsonist is in town and dead set on eliminating everyone and everything Josh loves. Now Josh is determined to protect Miranda at any cost, even if that means risking his well-guarded secrets and opening himself up to a relationship he’s always wanted but would never let himself have.

Danger, stubbornness, love, and a longing all blend together for one heck of a read in Love Me Tomorrow. Dee Tenorio has created two characters that are absolutely perfect for one another, if only the hero would go for his destiny as he should. It takes a series of shocks to get Josh and Miranda together, but that’s part of what made Love Me Tomorrow compelling. While Josh was stubborn in his refusal to enter into a relationship with Miranda, I never wanted to shake him over it, as I usually would with such a character. Ms. Tenorio didn’t overplay his fears and I adored Josh so much for his protectiveness, honor, and the love he felt for those he let in his heart that I understood why Miranda could not help but wait for him to come around. However, don’t think that Miranda just sits by the phone waiting for Josh to call. She’s every bit an intelligent, independent woman. She knows what she wants, goes after it, and takes the consequences for her actions like an adult.

While each Rancho Del Cielo book stands on its own, supporting characters from the series add light to the story, including the hero and heroine of the third book, Burn for Me. In addition, the arsonist targeting Josh adds an element of peril to Love Me Tomorrow, keeping the story moving at a fast pace. I’ve come to expect solidly entertaining romances from Ms. Tenorio and Love Me Tomorrow doesn’t disappoint. It’s sensual, gripping, and has a happily ever after that was well worth every bump in the road Josh and Miranda had to face to get there. Simply wonderful!
Tweet