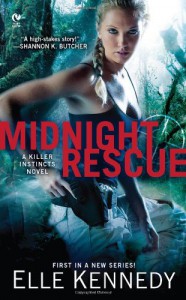 Abby Sinclair’s childhood was pure hell until she was rescued by an army ranger who helped her become the strong, fearless woman she is today. Abby’s now an assassin who will use every advantage to take out her target. But her latest assignment – to kill a Colombian drug lord – goes to hell when she finds out that her target is also in the sex trade. Desperate to free the young girls who are to be sold soon, Abby intentionally blows her cover and is captured and tortured as a result. Abby’s boss is none-too-pleased, but she recruits a team of mercenaries to rescue Abby, and part of that team is the devastatingly sexy Kane Woodland.

With Abby’s plans falling to pieces around her, she has to put everything on the line to convince Kane and his fellow mercenaries to help her rescue the imprisoned girls. Gaining Kane’s help is easy; it’s resisting her desire for him that’s hard. And the more time they spend together, the hotter the fires between them burn. But can there be a future for an assassin and a mercenary? Abby and Kane might not live long enough to find out.

Enter the high-octane world of Elle Kennedy’s KILLER INSTINCTS series with MIDNIGHT RESCUE. From the very first page, Ms. Kennedy thrusts readers into a gritty world where danger doesn’t just lurk behind, but attacks from every corner. Abby and Kane are playing the ultimate high stakes game, risking their lives and the lives of their friends to do what’s right. But MIDNIGHT RESCUE isn’t all about darkness – there’s scintillating passion and an excellent love story as well. Ms. Kennedy deftly blends the two as Abby and Kane fall in love.

Abby is a woman who’s deeply scarred by the past. She broke my heart and one of the joys of MIDNIGHT RESCUE was watching her start to heal – start to feel. It isn’t easy for Abby to let people in, but given her upbringing and the nature of her job, that makes sense. She’s got a hard outer shell, but Abby is incredibly self-sacrificing and has a good heart. She also has an incredibly difficult time reconciling her attitude toward sex with her desire for Kane. And speaking of Kane... Wow. As with all of Ms. Kennedy’s heroes, I absolutely wish he could show up on my doorstep. Kane is every bit as lethal as Abby, but he’s also caring and, I must say, off-the-charts sexy. I loved Kane and Abby together and they were a great emotional center for MIDNIGHT RESCUE.

Kane’s team of mercenaries and Abby’s fellow assassins round out MIDNIGHT RESCUE, ensuring that there are many more KILLER INSTINCTS novels that I am dying to read. I could go on about the characters whose stories I’d love to read, but that would make this a very, very long review. Suffice it to say, Ms. Kennedy’s skill at creating fascinating characters is at full force in MIDNIGHT RESCUE.

With its dark, edgy tone, passionate love story and deadly protagonists, MIDNIGHT RESCUE is a sure-fire win for fans of romantic suspense. I’m looking forward to re-reading Kane and Abby’s, and I cannot wait to read the next KILLER INSTINCTS book!